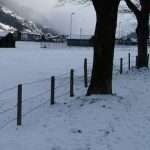 The presenters on Lyric FM must dread this time of year, the demands for the same music to be played year upon year. The daybreak programme included a version of the worst of all seasonal songs, “White Christmas”, (surely even Bing Crosby grew tired of listening to it?) As if on cue, the car twitched; ever so slightly, but enough to notice. The road had been salted, but the moisture on the surface had frozen again in the sub-zero temperatures, creating black ice ready to catch out unwitting motorists.

Do those who express a wish for a “white” Christmas have an understanding of what snow and ice mean for scattered rural communities, particularly for the older members of those communities? Only the main roads are treated, so many people may have to travel miles on often narrow and often winding roads just to reach a point where the gritting lorry has passed. If you are alone and elderly, it becomes a forbidding prospect. Being unable to get out means that others are unable to get in; no deliveries, no social services, you become dependent upon the goodwill of neighbours. Heavy snow and severe frost can bring the loss of electricity; the populous areas will nearly always be the first to have their service restored, the outlying farms will nearly always be the last.

Those dreaming of a white Christmas might give a thought to the unrelenting labour faced by small farmers. Slipping and sliding along a by road in the parish one day during the severe winter of 2010, when the daytime temperature was around minus ten, I saw a farmer I knew fixing hosepipes to a tank of water drawn by a tractor, he was bringing water to his cattle. On that same day someone had phoned, from a government office in Dublin, to say that my presence to say prayers at the official opening of the final section of the M7 motorway was not necessary because the opening had been cancelled; the main roads were too dangerous for the government minister to travel. It was a day that spoke of the different worlds inhabited by those who work in Dublin offices and those who got to unseen lengths in order to try to earn a living.

Silly speculation in the press about this winter being one of the worst in decades had no foundation in any meteorological science, but did serve to frighten isolated old people for whom ice and snow bring only misery.

The latest forecasts for Christmas give temperatures of eight or nine degrees Celsius with cloudy and damp weather. No ice, no snow, no fear and no pain. A green Christmas is good thing for which to dream.