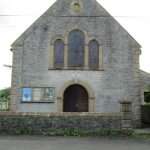 Sundays brought a mood of pessimism worthy of the sort of person who comments, “the nights are drawing in” on 22nd June. As long as it was still Saturday, there was a buffer zone against Monday, and Saturday would be clung onto as long as possible -watching Match of the Day and the Hammer House of Horror sort of movies that provided late night fare in the 1970s.

There was The Old Record Club on Radio 1 on Sunday lunchtimes, presented by an unmentionable BBC personality – selected records from the charts of the corresponding weeks of times past – but once it was over and Annie Nightingale came on air, Monday approached, ominously.

It was almost as though the people who planned the television schedules felt that programmes on Sunday evenings should have a despondent mood – they were uniformly gloomy:  the compulsory God-slot followed by slow moving drama series. It’s hard to imagine much of the stuff would ever find air time now, even on satellite stations in the middle of the night. Maybe there was a requirement that Sunday viewing had to have solemnity, an expectation that people would be sombre and serious.

In a world of three television channels – and, if you were a teenager, BBC 2 was all but unwatchable, there had to be other ways of passing the evening. Newspapers were still delivered door to door, even in our very rural corner of England, and the News of the World might not have had much by way of substantial news, but it did have good football coverage and lots of statistics. Time could be easily passed reading the result of each match with goal scorers and attendances, looking for trends; looking for how a winning run might transform the league fortunes of a team; looking at how some clubs, despite a lack of success, still drew tens of thousands of supporters. If the evening was exceedingly boring, there might even have been time spent pondering attendances as percentages of a ground’s capacity – the capacities having been learned from a football handbook in a library somewhere.

The only piece of religion in our house was a newspaper delivered by a local chapel-goer called Challenge; it used the strapline, “the Good News Paper”. Of course, the subtlety was lost on a surly teenager who thought it a bad newspaper that only confirmed a belief that Christians were exceedingly dull people who seem chiefly concerned with preventing anyone having fun.

Of course, such days are forty years past, yet the sense of gloom and foreboding still remains fresh.