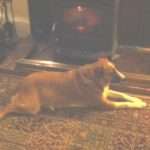 UTV Live tonight highlighted the plight of dogs at Christmas time. Puppy farms, puppies given for Christmas, old dogs being no longer wanted and being abandoned or taken to the council pound. To someone who regards most dogs as better than many humans, it is depressing news. A friend, who belongs to a Plymouth Brethren church, and I agree strongly on a doctrine that would probably be considered heterodox by the elders of his tradition and the bishops of mine: dogs surely have a place in heaven.

A conversation at a meeting of an evangelical group in Northern Ireland comes to mind.

“Heaven?” said the pastor, “Heaven for for me will be standing with my dog on a bridge in one of the glens of Antrim; just standing there looking down the glen.  And someone will come up and say, ‘What are you doing?’

It was encouraging that a Baptist pastor would expect to have his dog with him in heaven. Northern Ireland Baptists are not given to flights of speculative fancy. If someone who had devoted his life to Scripture, and to a conservative interpretation of it, might think his dog would be with him in the world to come, then my hopes seemed not so outlandish.

I hope the pastor’s account is the right one.  I would like to have a dog with me to stand on a bridge to ponder the scenery.  One of our dogs died in 2010, years before her time. She was eight years old and had gone to the vet to have a simple wart removed and never came around from the anaesthetic.

Saint Paul says in Romans Chapter 8 that Jesus’ death on the Cross frees not just human beings but God’s very creation from the burden of sin and death, he writes, “the creation itself will be liberated from its bondage to decay and brought into the glorious freedom of the children of God”. I hope Saint Paul is right.  I have always loved the dogs who have so much enriched our lives over the years, with their unconditional love and warm appreciation for everything done for them.

My Brethren friend says he tends to measure a person’s worth by their attitude toward dogs. Perhaps it it is not such a strange idea, someone who would be cruel to a dog tends not much of a human being.