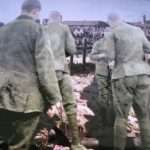 “I am bringing you good news of great joy for all the people”. Luke 2:10

A hundred years ago, Christmas 1914, there took place one of the most remarkable events in history, the Christmas truce on the Western Front. The story of the singing of “Silent Night/Stille Nacht” on Christmas Eve and the truce that followed on Christmas Day has been told and retold in these past weeks, on the radio, on television, in the newspapers. Using the five “w’s” for our questions, we might look at what that story says to us, what it says about our faith.

The soldiers involved in the truce were regular soldiers, the British army did not have conscription until 1916. These men were professional soldiers, many would have had years of experience, some would have been veterans of the Boer War. The soldiers involved in the truce would have been hard men, experienced fighters, men who had seen everything in life we might imagine and some things beyond our imagination. What these soldiers were not was soft or sentimental people given to fanciful thinking.

The men who sang “Silent Night” were as tough men as might have been met anywhere. Sometimes the Christian faith can seem like something for soft people, sometimes it can seem something for women and children. “I am bringing you good news of great joy for all the people,” said the angel. If those soldiers could sing a carol, then any of us can.

What happened there? The German soldiers are said to have decorated their trenches with candles, there were even said to have been Christmas trees in some places. Christmas was a time that was different, a time when even the worst of places might be changed. The sentimental Christmas we meet in films and on television was still decades away; what happened was something that came from the men’s own imagination, it was their own initiative.

On Christmas morning when they came up out of their trenches, it was against all orders. Had only a few done so, they would have been court martialled, that as many as a hundred thousand stepped out meant there were too many to punish them all. But what about those who took the first steps, how did they feel?

Where did the extraordinary events of a hundred years ago take place? In Flanders, in the No Man’s Land between the front lines. No Man’s Land was fenced on both sides by endless rolls of barbed wire; by craters and shell holes; by the blood of those who had fallen. No Man’s Land was not a place to linger; it was a place of horrific memories, a place where men had seen sights they would never wish to see again in their lives.

It would hard to imagine a place more unlikely as a place of peace and friendship, a place that would be remembered a hundred years later not just for the awful things that took place, but for this one moment when humanity meant more than flag or king or emperor. Do we ever expect unlikely things to happen in unlikely places?

“I am bringing you good news of great joy for all the people,” says the angels to the shepherds on a hillside outside of Bethlehem. It would have been hard to imagine a place more unlikely for the coming of the Son of God to be announced. God’s Kingdom comes in places it is not expected. If God can become present in Bethlehem, where else might it appear? Do we expect to see it in our own places?

When did the Christmas truce take place? After four months of bitter warfare. The First World War began as a mobile war, with armies on the move. Between September and November 1914, they tried to outflank each other moving closer to the sea with each move. Eventually, both sides reached the sea and there were solid front lines of trenches for hundreds of miles. By Christmas 1914, the war was at a standstill, thousands and thousands had died. The German advance had been stopped, but the allies could drive them no further back. The truce came at a point where the soldiers must have eyed each other with suspicion, with hatred.

December 24th 1914 was not a moment when battle-hardened men might have been expected to have set aside their weapons and to have greeted enemies as friends; no talks, no negotiations, simply peace. If peace can come at such an unexpected moment, what things might happen when we least expect them?

“I am bringing you good news of great joy for all the people,” says the angel, terrifying the poor shepherds who could not have imagined such a thing taking place at such a moment. God’s presence can become known to us when we least expect it. Do we expect such moments to happen?