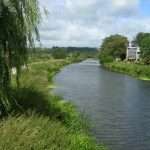 Christmas Day 1974, forty years ago, I received a fishing rod as a Christmas present. It was not my first, my great grandmother had given me money for a sea fishing rod when I was ten, but it was the first coarse fishing rod I could call my own, until then I had borrowed one from my father. It is probably still lying somewhere, never having had many hours of use.

In teenage years, I would have cycled with friends to the River Cary, on the moorland north of our village, or would have cycled from my grandparents’ farm down to the banks of the River Parrett. Not once did I ever catch anything, perhaps I was using the wrong tackle, the wrong bait, or fishing at the wrong time, or in the wrong place. Perhaps it was just a lack of patience, a lack of willingness to sit long enough on a river bank.

There have been moments when I have wished I had been the sort of person who might have spent countless hours using that fishing rod. Like watching a couple on a beach on an autumn evening last year.

There appeared, from seemingly nowhere, two figures. He carried a bag on his back and a fishing rod in each hand; she walked just behind him, chatting as they walked along. A night fisherman, one of those who appear after everyone else has gone home, one who enjoys the beach in the dark hours of silence. Was he going to fish alone, or would his companion remain, sitting with him staring out into the darkness of the Atlantic?

It had seemed a picture of perfect contentment. To be able to walk down onto the beach for a night’s fishing suggested there was no other demand upon his time; there was no need to be anywhere in the morning; no need to worry that someone might be looking for him, or that someone might phone. To be a night fisherman meant freedom, not a worry in the world. Perhaps back in the car there would have been a flask and sandwiches; perhaps the lady with him remained for a while and then returned home; perhaps she arranged to call back at some late hour, or waited until morning time.

To have sat there, watching, feeling for a tautness in the line; slowly winding in the baited hook and weight before, once more, casting them deep into the surf; pushing the handle of the rod deep into the firm sand and sitting down, waiting to catch sight of movement of the rod’s tip; seemed a pastime of perfect contentment. Or perhaps it took a perfectly contented person to pass their time in such a way.

Being given a fishing rod for Christmas does not make one a fisherman.