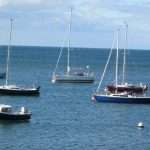 This blog has been going so long that when it is 10.30 at night and there are a hundred and one things to be done and tiredness is closing in, it’s possible to pick something from ten years ago, like this post from January 2005.

Every Monday morning at about ten to ten I drive the road between Bray and Greystones, some of you will know the road. I don’t like Monday mornings anymore than anyone else does, so I tend not to be very happy as I drive up the road passing Bray Golf Club on the left hand side.

Once you get to the top of the road at Windgates, you begin the descent down into Greystones and as you look to the left you catch sight of the sea. I love that moment, every week the sea looks different, every week the light on the water changes the scene from the last time I saw it.

I always loved the sea. We lived miles from the sea when I was a child and I didn’t get to see it very often. There used to be an outing from our village every July to a place called Weymouth on the coast of Dorset in the south of England. The bus used to go up a few miles outside of Weymouth and then as it went around a bend at the top of the hill, we would catch sight of the sea for the first time. I still remember the excitement of that moment. Weymouth wasn’t a very exciting place; we would sit on the beach in deckchairs that cost a shilling for the day; or walk around the shops that sold things that fell apart before you got them home. We always had our tea in a café – fish and chips and peas and bread and butter.

What mattered about Weymouth was that it was the sea: the sea with all of its magic and excitement; the sea that filled up boys’ adventure books, the sea that was the place for battles and heroes rescuing people in storms. The sea was the place where people sailed off to strange and exotic places. No-one went anywhere strange and exotic from Weymouth in those days, except for the old British Rail car ferry to France, and I was years older before I sailed on it, but you could imagine epic journeys beginning as little boats sailed out of the harbour.

It’s years since I read a boys’ adventure book and a good while since I was last in Weymouth, but the sea still grabs my imagination. I couldn’t figure out why, I get seasick on the Rosslare ferry, until one morning a couple of weeks ago.

The first blossoms were beginning to appear on some of the bushes at the roadside as I drove towards Greystones and I looked up at Little Sugar Loaf. Soon, I thought, the hillside will begin to change colour as the spring arrives, even the hills change through time. I passed Windgates and looked down at the sea, and realized that here was the one thing that doesn’t change.

The sea off of the Wicklow coast has seen thousands and thousands of years and history, it has seen great events, it has seen invaders come and go, it has seen pain and heartbreak as the emigrant ships left Ireland, and it has been unmoved, unchanged. You could be the most important, most powerful, most famous person in the world, and that sea was there long before you and will be there long after you are forgotten.