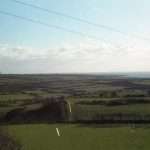 Memories remain of driving from Co Galway to Co Down on a spring day in 1988 or 1989. BBC Radio Ulster had a phone-in programme in which people recounted family stories. One man telephoned to say his father had fought in the American Civil War. The presenter was incredulous of the caller’s claim, “The American Civil War was more than one hundred and twenty years ago, how could your father have taken part in it?”

There was a clearly audible tone of hurt in the caller’s voice, “my father died in 1937, he was 97 when he died”. Improbable as it seemed, the caller was able to tell of his own father’s exploits in a distant conflict.

Sitting in a farmhouse kitchen in Co Down in 1995, a lady born in 1903 talked of stories she had heard from her grandmother. “There was terrible fever and down at the corner of the road there was a place where people were given food”. The stories were of the Great Famine of a century and a half previously.

Country communities have a capacity for stories which straddle history, stories that might be greeted with scepticism by those whose urban histories are much more densely packed. Perhaps the stories persisted because the environment  in which they were created barely changed.

On a bitterly cold January day in the early-90s, I called at an old people’s home in Co Down. An elderly bachelor farmer from the parish, in his late 80s, had finally accepted that he was no longer able to cope by himself and had agreed to go to the home because it was barely more than a mile from his land. I was glad to be calling at the home and not at his cottage on such a day, the cottage had few comforts and was rarely warm.

“Your neighbour’s minding your cottage?”

“It’s very cold today, Jack. What about the pipes in your cottage?”

“The water pipes, Jack. Will they be safe enough in the cold?”

“I have no water pipes”.

“What do you mean, Jack? Where did you get water if you have no pipes?”

“From the pump down the yard”.

This had been a long conversation by Jack’s standards. I pushed my luck.

“Jack, where did you go to school?” I knew the answer, but wanted to get him to talk.

“I did. Across the fields each morning. I took the cattle out to the fields on the way to school”.

“It would have been cold on days like this”.

“Were you wrapped up well?”

“I had no shoes. Shoes were for Sundays”.

Jack did not spend long in the home, he died within months of his arrival.

Should I remain alive another thirty years and tell tales of a man in Co Down going barefoot to school, there will probably be as much scepticism as if I were telling of the Famine or the American Civil War.