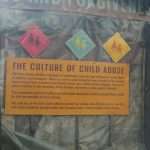 Among the depressing stories of the week comes a report on the BBC that the Pope says it is reasonable to use violence against children. The BBC report him as saying,

“One time, I heard a father in a meeting with married couples say ‘I sometimes have to smack my children a bit, but never in the face so as to not humiliate them.’

“How beautiful,” he added. “He knows the sense of dignity. He has to punish them but does it justly and moves on.”

He has to punish them so does it justly? It is “just” to beat a child? Given that the Pope’s knowledge of parenting is somewhat limited, one can only wonder what books he has been reading.

One day, when our son Michael was about five I was so angry and frustrated with him that I smacked him. He looked at me through tears and said, “Big people shouldn’t hit little people.”

It was a simple and powerful argument, something presumably picked up at nursery school or primary school. Resorting to violence wasn’t about trying to change things, it was about an admission of failure to change things. Our house remained a strict one without the need to slap. Words and sanctions were far more effective than smacks.

Even at the fundamentalist Christian school I attended it was apparent to the teenaged pupils that the school’s “spare the rod and spoil the child” philosophy simply did not work; the same boys were caned again and again, it never changed their behaviour. The fact that they were being punished owed more to the fact that they were  the ones caught, than to the fact that they were the only people guilty of these wrongs. Punishment neither deterred them or others from the minor misdemeanours that might merit the use of the cane.

Violence is about big and strong people dominating smaller and weaker people; whether me slapping Michael or governments using force to suppress groups they don’t like, it is not a solution to anything. Anyone familiar with the sad history of relations between Ireland and Britain will know that violence never brought solutions, whether in centuries of British repression or in a Republican philosophy that embraced bullets and bombs. Violence just builds up a huge storehouse of resentment which sometimes gets carried down the generations.

If the Pope wanted to understand why there is such resentment towards his church today, he might look at the history of beating children in this country, violence sanctioned by the church and often perpetrated by its priests and religious orders. And, the Pope being a social media savvy man, he might watch Suzanne Vega’s “Luka” on YouTube. Perhaps someone in the Vatican might transcribe the lyrics for him, and then ask him if he still thinks beating children is something beautiful.

Violence is about inadequacy and failure, it is never about beauty.