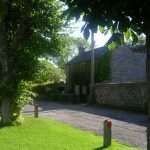 Did you ever watch any of those English television detective series, the ones where one murder leads to another, and then another? Hardly a week passes without the poor vicar of the parish ending up among the victims.

The vicars murdered in the detective programmes seem to be people who spend most of their time in beautiful medieval parish churches, preparing for services. They seem never to have more than one church, and it sitting beside an idyllic village green. The vicarage is a short walk away; it is a period residence around which the vicar’s spouse has cultivated perfect gardens.  The vicar has an intimate knowledge of the local community and members of that community readily call at the vicarage door.

Each Monday morning the Church Times arrives in the post (it reaches English addresses on Fridays, but with us being overseas, and there being no Saturday post here, it reaches us three days later) and every week the job advertisement are perused. If the television detective series corresponded with the truth, there should be positions for vicars in villages in the Home Counties; they should stipulate that there is one church, a fine vicarage and a supportive community.  Of course, no such positions ever appear; even if there were to be a hint of such a situation, the managerialists in the Church of England would rush to stamp it out.

As long ago as 1964, the Paul Report spoke of the wasteful deployment of clergy in small rural benefices whilst in large urban parishes clergy strove to minister in communities of thousands. It sounded laudable that something that became known as the “Sheffield formula” would be applied to the resourcing of ministry, a formula that would effectively ensure the reduction of the number of clergy in small rural benefices and a greater concentration in populous urban areas. The vicar of the detective programme might be a plausible concept in the times of Miss Marple or Chief Superintendent Foyle, but by the time of Chief Inspector Barnaby the vicar would not have been killed because he would be at a meeting at some remote corner of a benefice that included half a dozen churches and, so, would not be in the nearby parish church when the murderer arrived.

Had the bishops, and their advisers who profess worldly wisdom, learned from the hard-nosed world of business, they would have realised that one builds from a position of strength, not from one of weakness. In business terms, cutting the number of clergy in places where the church had relative strength in order to send more to places where it was weak was as logical as Tesco reducing the number of staff in profitable stores in order to pay for more in places where it was making a loss.

The church is not a business, and its responsibility to try to provide pastoral care to whole communities required a shift of emphasis, but, judging by the Church Times advertisements, it has reached the worst of both worlds – sharp decline in rural communities and sharper decline in most urban areas, taking vicars from small communities did not strengthen the church in populous places.

Should you want to find a vicar pottering in a local church, you would do best to watch television.