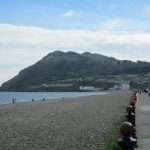 A female duo was played on the radio, strong, feisty voices performing in a way that suggested a live performance would be a good evening’s entertainment, not that I go anywhere further than the settee these days. The last female duo I heard live was in a pub in Bray in the spring of 2010, almost five years ago.

Between the final whistle at a League of Ireland football match and the northbound DART train there was time to sit at a table on a warm evening and listen to the music. “I would pay to listen to them in concert”, my companion declared. He was right, they deserved a better audience than a noisy Friday night pub. Pausing a final few seconds before walking to the station, there was a sense that this was an end, that there would be no more evenings in Bray, no more football matches, no more glasses of beer with friends, no more train journeys home. There was an air of sadness stepping onto the train for the last time. For eleven years we had come to matches on numerous nights in the year, and now the trips to the evening fixtures would be no more.

The song on the radio concluded and the pondering of the past ended. That’s the problem with nostalgia, it’s useless, it uses up your time and gives you nothing back. Whatever the reality of time, there is no replay option, no chance to go through it again; once gone, it is gone.

Nostalgia has an entire industry of its own, not just music, but television and travel and fashion; appeals to the past are money spinners. Take people back through the years and they feel younger and, supposedly, happier. But it’s all a con: there is no going back, never was and never will be.

Maybe the duo from the pub did get a gig somewhere more glamorous, maybe someone heard them and thought them worthy of a contract. Maybe in the new season there will be evenings when one could take the DART down to Bray to watch a match. Maybe there could be an opportunity to sit with a friend and consider what music we liked. But none of it would recover time that is gone forever.

What does nostalgia do apart from making you unhappy and robbing you of your time?

The next female duo on the radio will be considered in the light of the present.