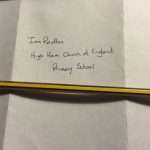 Picking up the pencil, there was the scent of it having been freshly sharpened. The wood smell brought memories from childhood days in Somerset.

In days before everyone had ballpoint and felt tip pens, pencils were pervasive. In our primary school, we were allowed to write with pens only in the penultimate year, until that time everyone was supplied with an HB pencil. Clipped to the edge of the teacher’s desk at the front of the room, there was a sharpener into which one inserted a pencil and turned the handle. The sharpener ensured that the wood smell was a daily presence in the classroom, perhaps it should be unsurprising that the scent can prompt a recall of those times now long distant.

It is the aroma of security, the aroma of a world that was safe and imbued with an irrepressible optimism. Of course, the reality was dull and unexciting, life was parochial and uneventful, but when one knew nothing different, then it was happy, because there nothing one knew of that might make it unhappy.

If a single year  epitomised the contentment of ordinariness it was probably 1970. Nine years old for most of the year, the pencils would have been a daily reality. Being honest, the pencils probably represented the bulk of what constituted reality for us, for what else was there in our lives apart from home and school?

A photographer would call house to house in our village, offering to take portraits of the children of the family at a modest cost. For years, one of those photographs hung on the wall of our house, a nine year old boy, as monochrome as the photograph in which he was featured, but uncaring about such perceptions, for what did the opinion of anyone matter when none of us were of any consequence?

What were the highlights of 1970? There was the FA Cup final, screened live on both channels received by our VHF television, and there was a trip to the cinema to see “The Battle of Britain”. When returning to school after the summer holidays, we were asked about how we had spent our summer. Few people would have gone away, so the tales we recounted were probably little different from the stories we might have told of our daily lives at any time of the year. Lines describing the film are still fresh in the memory; if the teacher thought it dull that a single trip to the cinema might have been the highlight of a six week break, then she didn’t suggest so.

A plain HB pencil still has the power to evoke a world of satisfaction at small things, of pleasure at seeing cousins, of delight at an evening trip to the seaside, of drawing (badly) scenes from history and wars and motor races. It is a reminder of bad handwriting and a reversion to what the teacher referred to pejoratively as “printing” at the age of fifteen, a habit that continues forty years later.

The scent of a pencil, and another country where things were not done differently, but were done contentedly.