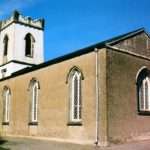 A sermon for Mothering Sunday is here:

“Everyone”, you, me, the man in the street, the lady on the bus, the most unlikely, the most ungodly, God will relate to any of us directly. When we think about God it maybe as a powerful, terrifying figure, but he is also a God who is immanent, a God present, a God there, at all times in all places. “Everyone” is a statement that this is an accessible God, that this is an approachable God. “Everyone” is a statement that God does not discriminate: whoever responds to God, God will respond to them. The story of Jesus is the story of God being present to anyone who chose to listen to him, “everyone who believes” has God alongside them.

If “everyone” tells us about a God who is near and who is prepared to be a close friend, it tells us about what the church should be like and what it shouldn’t be like. The first Christians had trouble with this idea of “everyone”, they were Jews and they expected anyone who wished to join them to become Jews. “Everyone” was not an idea that fitted in with their Law, they were the chosen people and as far as they were concerned membership of God’s people was not open to “everyone”. Paul has to write to the early churches a number of times to make the point that they couldn’t carry on with their old attitudes.

What we see as the centuries passed is that the church became the institution that has often turned people away from faith. The church liked to have power, it liked to have influence; bishops were like princes. They weren’t going to accept that everyone who believed in Jesus would have a place in heaven. Far from it, to have a hope of a place in heaven you had to be subject to the rule of the church, you had to receive the sacraments, you had to accept everything the hierarchy said. If you refused, it wasn’t just a religious matter, it was against the law of the land and you could end up being burned at the stake for heresy. So much for Jesus saying that everyone who believed would have eternal life.

What happened in the 16th Century was that some people started reading the Bible and saying to themselves, and to anyone who would listen to them that Jesus did not say these things, that Jesus did not say that the way of salvation was controlled by the church. Jesus said, “everyone who believes in him”. Jesus didn’t say you had to do and had to believe all these extra things.

When we talk about faith, let’s talk about what we believe, not what the church says, let’s recover Jesus’ words to his disciples. “Everyone” is a challenging word to us.

“Everyone” is also a troubling word in a society where the church has been used to handing down its verdict on anything and everything and having people accept that verdict. There are still many people and clergy who think things should be as they were in the past. But we’re in a society that is changing very fast—twenty years ago, no-one could have envisaged things being as they are today.

For so long church teaching was accepted without question. Morality was whatever the church said was moral. Authority was not challenged. Now it’s all changed, the church is just one voice among many and people must choose for themselves.

“Everyone” is a word that makes things different.