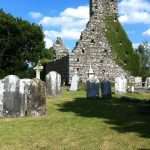 A country funeral, a celebration of a good and faithful life, and an opportunity to speak of all that was pure and good, to give thanks for the person we knew and loved. An opportunity to unhesitatingly speak the whole truth. It is not always the case that the truth is spoken at funerals

There is an old Jewish story about a gathering for a funeral.  The mourners have come out of a sense of obligation rather than through any fondness for the departed.  The rabbi sensing a feeling in the air asks, “Would anyone like to say a few words about our brother Isaac?”

There is an embarrassed silence as people look at their feet or stare fixedly into the middle distance so as not to catch the rabbi’s eye.

Feeling awkward about the situation and feeling that someone should say something, the rabbi asks again, “Would anyone care to say a few words about Isaac?”

Again, there is silence, no-one prepared to venture even a word.  As the silence drags out the sense of awkwardness continues, people furtively glancing around to see if anyone will speak.  Eventually, a man, a contemporary of Isaac, feels compelled to speak up.

“His brother was worse”.

The stories comes often to mind at Irish funerals where there are moments when the truth is the last thing anyone wishes to hear.

Ministering in a far away country parish, twenty years ago, there was the funeral of a man who was chiefly known for excessive eating and gambling; both sustained through the generosity of the taxpayer who provided the various benefits he drew.  Regular visits to him never prompted any degree of spiritual reflection on his part.

One day, as I drove to a local town, the man waved me down at the crossroads close to his cottage.  I wound down the car window and asked if everything was well with him.

“Oh, your reverence, it’s you! If I had known it was you, I wouldn’t have waved you down.  You’re not the man for the job; I wanted someone to take a £5 bet to the bookmaker”.

Telling the story at the funeral, I said, “Perhaps I’m not the man for the job, today,” and then tried to talk about the man as he was.

The nephews responsible for looking after the man expressed thanks that the truth had been told; they had had a terrible time trying to deal with him on his frequent visits to hospital over the years.  The man’s brother, who had not been near him in twenty years, said, “You shouldn’t have told that story about the bet – that wasn’t right”.

“Did you visit him?”

Sometimes, sitting at funerals, there seems a great collective conspiracy to say nothing unpleasant.  Everyone may know the truth (in the country everyone plus their neighbours in the next townland know the truth), but no-one seems prepared to say anything.  Sometimes the very thing needed for the healing of memories is for someone to stand up and call things as they are, but there seems a superstitious inhibition to speaking.

Dead people do not affect us, but their legacy lives on.  There is a need to speak of the dead as they were, it might be good and happy, as it was today, or it might be that they were worse than their brother.