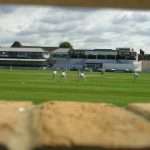 The cricket county championship began today. Somerset started brightly, but were then all out for 299. A pattern familiar in the history of the club.

Somerset have never been county champions. Somerset did not win their first trophy until 1979, when the club was 104 years old. It is some ten years since I last attended a match, the last season in which they won anything. Following their fortunes over the years has not been without its advantages, though; it has taught the value of stoicism in the face of setbacks. I remember being at a Gillette Cup match with a friend in the summer of 1980—Somerset almost won. As the players left the field, I sat staring into the space where they had been. “That’s it”, said Chris, my friend, “it’s over”.

It was over. In a few brief moments, a match that could have been won had been lost by two wickets. I remember shrugging, breathing a sigh and standing up to turn for home. It was only a cricket match, but it seemed like a bitter personal blow. His words remained with me, “That’s it. It’s over”.

“That’s it. It’s over”, isn’t just a reaction to a cricket match. For many of us, it’s also a reaction to the end of life. It’s the way that many people of my tradition cope with things. We aren’t into emotion, we don’t like expansive expressions of sadness or grief. “Sorry for your trouble”, we say, and we move on – and that’s not a criticism, that’s what I do myself, that’s how I cope.

I used to love the English poet and writer Ted Hughes. Hughes wrote a collection of poems called Crow. There are lines in Crow that for me are often a way of coping with death.

But who is stronger than Death?
Me, evidently.

Ted Hughes, in his gritty north of England way, accepts in Crow that death has been a strong power in his life, that it is been stronger than hope and love and life, but that he himself is still alive and that he is left to carry on. That sort of stoicism, that sort of grittiness is the way many of us cope with grief. “Chin up, lad. No good looking miserable. No good staring into space. Life must go on”.

Life goes on – and there is a whole cricket season to come.