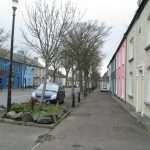 Today we went to Killough. We had not planned to go to Killough, nor is it a place through which one might pass on the way to anywhere, but we arrived there anyway, and in a chill wind walked a circuit of the village.

It is odd that a place from two decades past has assumed a magnetic quality. It was on a late December day in 2012, with the madness of Christmas past and most people in that lull of the dull days before the new year, that I went back to Killough for the first time in years.

Killough had always a place dear in my heart. The third in a group of three parishes, its Sunday morning service was at 12.15, the end of duties for the day. There was a moment of contentment on summer Sunday morning’s in sitting at the prayer desk in the church as the lessons were read and as sunshine streamed through the windows on the south side of the nave.

The village had once been the property of the Ward family, titled people who had lived in the district, but such times were long past, their only obvious relic being the name of the local youth club, which derived its name from the former Church of Ireland school building in which it met. It was said that during the Belfast blitz, families had fled the city and had bought derelict cottages in the village for as little as £5 each; the influx of the 1940s had been followed by arrivals in the 1970s as people sought to escape the Troubles. The Church of Ireland parish had been independent until being grouped with the neighbouring parishes of Ballee and Bright in 1968. By the time of my arrival two decades later, the Anglican population was about forty, I came to know each one of them well.

The village had always a quality of ‘otherness’. Its sycamore lined main street gave it an almost French feel; the relaxed mood of daily life gave it a sense of being in the West of Ireland. Along with those from the locality and those from Belfast, there had grown a small group of artists and academics, attracted by the beauty and the economy of the place.

The last time I had set foot in the village had been fifteen or sixteen years previously, returning to pay my respects at the funeral of one I had known well. Moving to Dublin in 1999 and further south in 2010, the possibility of walking through Killough became an unlikely one.

Parking at the end of Fisherman’s Row on that winter’s afternoon, and stepping out of the car in bright winter sunshine, there had been at once a strangeness and a familiarity about the place. Among those in the street and along the walk by the harbour, there had been no-one I recognized, but the streets, the buildings, the scenery, had remained as they were in memory. It had been like returning to a house in which one had lived, but which now had new occupants.

Today, for the first time in two decades, I knocked at a door. There was no-one at home, but it felt that a rubicon had been crossed, that it was a place no longer strange.