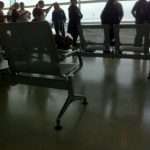 Landing in Brussels on a bright Monday morning, a friend took out his wallet to sort through the notes. He had come from Northern Ireland to join our group and wanted to sort Sterling from Euro. Had we made the journey here in a Europe that had not plunged into war in 1914, the sorting might not have been necessary.

The last edition “Bradshaw’s Continental Railway Guide” before the Great War pointed to a Europe that was converging, it was the sort of Europe that would have been strongly opposed by the nationalist movements that have emerged across the European Union a century later. Had the trend discernible in 1913 continued, even Sterling might have disappeared.

On page lxx of the continental edition of Bradshaw, there is “A Concise Table of Foreign Moneys”. France, Italy Belgium and Switzerland each have the Franc as their currency, and while Greece has the drachma, the Franc is readily acceptable. A note to the table says,

“In France, Belgium, Switzerland, Italy, and Greece, 5 franc pieces are legal tender in each country, irrespective of their country of origin. Smaller Italian coins only pass in their own country; French, Belgian and Swiss small silver coins pass indiscriminately, but not the copper or nickel centimes”.

Nine decades before the Euro, there was a common currency in wide circulation in a Europe where borders were more open than they would be for the next eighty years. Pages lxvi-lxvii of Bradshaw have “Regulations respecting Passports”. Denmark, Iceland, Greece, Noway and Sweden have “No Regulations in force”. The notes on Austria and Hungary and the Netherlands say Passports are not legally  necessary. In France, “the possession of a Passport may save inconvenience” and in the German Empire “the possession of a Passport is not obligatory”.

In 1913, a single Europe seemed a possibility without the accumulation of bureaucracy and regulation that has accompanied the development of the European Union, the drawback of travel in those times being the customs duties imposed at every border, duty free goods being no more than those that might be used in the course of a railway journey.

Had the catastrophe that befell Europe the following year not occurred, we might have reached where we are at a much earlier date, and might have done so without commissions, councils and parliaments. Landing in Belgium, we come to perhaps commemorate not only the lives lost between warring kings and emperors, but the loss of the opportunity of a Europe that is now unimaginable.