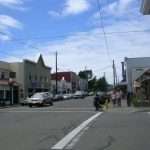 From my childhood days, American cities have always had a poetry of their own.  They were the places from the series on our black and white television; thousands of miles apart, they became an amalgam called “America” in our minds.  In fact, America had no television existence outside of the cities.  Rural life was an undiscovered country; the only time anything not urban appeared was in cowboy films, and they were very predictable.  Rural life could have been presented in any way that anyone wanted and, we would have been none the wiser.

The television images were reinforced by the songs.  Americans sang about where they lived; these were not just folk songs, not just pub songs, these were major hits.  Massachusetts, California, New York, West Virginia – place after place took on a romantic hue.

What chance would there be of someone singing about driving around Co Offaly for the Electricity Supply Board having a hit?

Places in Ireland just don’t have that same resonance.  If songs are sung about Irish towns or cities, they are about those places in the past, Dublin has Molly Malone, The Rare Auld Times, On Raglan Road and numerous others. There is probably a song about every county in Ireland, but they are not the stuff of a Marty Whelan programme.

How is it that Glenn Campbell can imbue places with a quality that captures the imagination of listeners around the world? And why can’t we do the same?