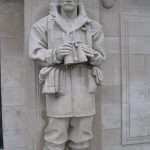 The House of Commons returned today after the General Election. With an overall majority and a Right-wing agitating for change, the Conservative government may lead a British exit from Europe, perhaps forgetting what it was that created the European project in the first place. There are “interesting times” ahead.

A childhood memory remains vivid. A handful of coins was strewn along the country lane, distant from the nearest houses, presumably fallen from the pocket of some passing cyclist. There were seven shillings in total, (decimalisation was not to happen until the following year). It was not a fortune, but was enough to buy something in 1970.

A trip to Portland in Dorset allowed access to a shop that sold model ships, for six shillings and ten pence I bought an Airfix model cruiser. It meant having only tuppence change from the seven shillings, but for a cruiser the expenditure seemed worthwhile.

The moment of disappointment came when reaching home. The instructions included a history of the ship, the name of which has long since receded into the depths of the memory. The ship had been launched in 1946. Being launched in 1946 meant it had missed the Second World War, it meant that it did not command great esteem in the mind of a nine year old boy who thought significance was determined entirely by involvement in the conflict of 1939-1945. The model never ever gained a place in the affections; no-one would be interested in a model of a ship that had not taken part in any major battle or campaign.

At nine years of age, the cold realities of what it meant for a ship to be interesting had not sunk in. In 1970, the crews of such ships were often men still in their forties, maybe they had not yet begun to tell the full story, or maybe a diet of comics and black and white films closed out what they were saying.

Had members of the government, most of whom are younger than someone who was a nine year old child in the summer of 1970, lived through the “interesting times” in Europe, their perspective might be very different.