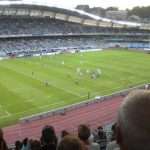 It doesn’t matter, it really doesn’t matter.  Aviron Bayonnais being relegated this afternoon doesn’t matter. They are a rugby club in a different country; why should they make any difference to someone living in Ireland? Were I living in south-west France there might be some rationale in following the performances of one of the country’s less famous clubs, but living here, it’s just a piece of eccentricity.

I wouldn’t even have met with them had I not been scanning through fixture lists of pre-season friendly matches on a July evening in 2007 and discovered they were playing against the full Irish international team, and that match would have been unmemorable had it not been for the Irish captain receiving a broken cheekbone and the singing of the Bayonne anthem.

The anthem is one of those tunes that make the hairs stand up on the back of your neck, but there are lots of tunes like that, a tune by itself hardly prompts the following of a team’s fortunes week in week out on the club’s website and watching whatever matches I might catch on television.

I have often wondered at colleagues who developed passionate interests in unlikely things – steam railways, ancient buildings, obscure books, esoteric scholarship – but perhaps there is a thread running through it. Perhaps it is about investing one’s feelings in things that are impersonal and even remote.

Perhaps it is a way of coping with the pain of some the stuff that has to be dealt with, and with the isolation that comes from never ever being able to share things heard. Whether it’s a 1940s steam locomotive, or a New Zealand winger in a Basque  team’s colours crossing the line for a try, it is stuff that is going on out there, it is stuff that can’t hurt you.

The colleague whom I most respect in the whole of our church once passed by an encounter, that many people would have regarded as an opportunity of a lifetime, in order to spend a day travelling around the steam railways of Kent. He spoke with delight of his meeting with the men who kept those lines going; he had not one moment of regret for not accepting the invitation he had declined. It seemed an odd decision yet if we are surviving by transference, or whatever process it might be, then there was sense in the choice.