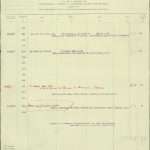 The horse chestnut blossom was over, but the blackthorn was still in abundant bloom. There could be few more beautiful days in the year; a deep blue sky, warm sunshine, and a gentle breeze – sometimes Ireland can manage summer, for a few hours at least.

Castlefleming church would not be the easiest to find; a by-road, and then a smaller by-road, and then a turning up a lane leading to a private house. A spacious car park that would be the envy of many country churches lay across the road from the church. I stopped the car and walked to the gate. It was once an estate church, perhaps once filled with the tenants who worked the land, now kept pristine by a faithful small number.

Expecting the place to be deserted late on a June afternoon, it was a surprise to meet a man trimming the grass surrounding graves. Perhaps he was just as surprised to have his peace disturbed by a clergyman he did not recognize.

Introducing myself, I explained that I had been five years in the district and had never before found my way to the pleasant place at which we now stood. “Would you like to see inside?” asked the man.

We stepped inside the small, neat stone building. Everything was as one would have expected, polished painted, plain and Protestant. We stood and talked of church past and present and only when we turn to leave did the cross catch my eye. Fixed to the wall, varnished, it might have graced a Communion table had it not been for a small metal plaque nailed to the middle and the inscription it bore,

“That’s a grave marker from the First World War”, I said.

The man looked at it. “I don’t know where he is buried.”

“Probably somewhere in France or Flanders”, I said, “for the cross to have come home. The IWGC was the Imperial War Graves Commission. They would have put up a headstone in the 1920s. The details would be on the Internet.”

There seemed a shadow over our conversation. The thought of a man leaving the gentle greenness of the townlands around to die in the bloody awfulness of the Western Front was hard to contemplate.

Driving back, the road passed the railway. Private Sidney Roe would have caught the train from Ballybrophy station, just up the line. These fields would have been his last sight of home. Perhaps some of the great horse chestnuts stood at the roadside in his time. It was a melancholic thought – the shadow of death in high summer.