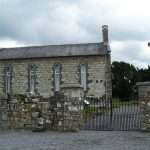 “The kingdom of God is as if someone would scatter seed on the ground” Mark 4:26

It is a little early in the year to sing hymns for harvest thanksgiving, the fields are still green, it will be sometime yet before the grain is ripe, but the second verse of the hymn, “Come, ye thankful people, come” is based on words from Saint Mark Chapter 4 and Saint Matthew Chapter 13. We may have attended many harvest thanksgving services and we may have sung the hymn many times, but did we ever stop to think about what we were singing? To jog memories, the words of the verse go:

All the world is God’s own field, fruit unto his praise to yield;
wheat and tares together sown unto joy or sorrow grown.
first the blade and then the ear, then the full corn shall appear;
Lord of harvest, grant that we wholesome grain and pure may be..

“All the world is God’s own field”, says the hymn; “the earth produces of itself”, says Jesus. The world in which we live is a world filled with possibilities, filled with potential. No-one knows how things will turn out. If the field in the parable is the Kingdom of God and the Kingdom of God is the world in which we live, then when Jesus says, “the earth produces of itself,” he is saying that we live in a world that offers us choice. We are not controlled, we are not forced to think or speak or act in particular ways; the way in which we live our lives is for us to choose. “The earth produces of itself” suggests a world in which the unexpected might happen, a world where we might have to cope with things we did not anticipate, a world which might not be what we want.

When we feel like complaining to God, have we recognized that we have been given a world where there is freedom? Have we accepted that we live in a world where we have free will and where things might happen that God himself does not want?

“First the blade”, says words from the hymn, “first the stalk” says our translation of the Bible. When Jesus talks about the tares in Saint Matthew Chapter 13, he was probably talking about darnel. It is a sort of ryegrass that looks like wheat in the early stages of its growth. The tares are left to grow because the workers could not have told the difference between the stalks of wheat and the stalks of darnel. When we look at a field of stalks, it is hard to tell them apart, and when we look at people it is often hard to tell who are those who are going to live life as God would wish and those who are going to go their own way.

Our lives might be very different if we were more realistic in recognizing that we live in a world where people who might look similar on the outside, but on the inside are widely different. We need to be mindful of people, be careful, be wary; not all the people in the world are people of the Kingdom.

As Christians, we need to ask if we are distinctive people, if we are recognizably different from the people around us. If someone asked us for signs, for evidence, that we were Christian, to what might we point?

“Then the full corn shall appear”, says the hymn, reflecting Jesus’ words, “then the full grain in the head.” The ears of corn are to grow to fruition, so that, in Saint Mark Chapter 4 Verse 29, “when the grain is ripe, at once he goes in with his sickle, because the harvest has come.” The process of growth is completed in three stages: the stalk, the head, the grain; the blade, the ear, the full corn. Jesus expects his followers not only to grow and be different, but to be people who produce a good yield, to be people whose lives are filled with signs of their faith.

If we are people who are seen as different, we must also ask ourselves what we produce in our lives. What harvest do we show? In the Letter to the Galatians Chapter 5 Verse 22-23, Saint Paul says we should be people who produce spiritual fruit and he sets down what that fruit should look like, he says “the fruit of the Spirit is love, joy, peace, patience, kindness, generosity, faithfulness, gentleness, and self-control”.

Four challenges to us, to make the right choices in the field that is God’s world; to know the right way to be God’s people when we look like all those around us; to be people who are recognized as different; and to be people among whom the Lord finds a rich spiritual harvest.