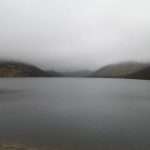 Pulling up the car in the rectory drive, a young crow hopped along on the tarmac, seeking refuge. It reached the wooden fence that separated the drive from the lawn to the rear of the house, and could go no further. It turned and watched me. Stepping from the car, I walked towards it. Stretching out its wings it hopped away. Another crow, that was presumably mother of the young one, flew overhead, screeching loudly.

It seemed it had nothing broken, but was presumably too weak to return to its nest. If it lingered too long at the foot of the fence, a neighbouring cat would make quick work of it. There was an inclination toward trying to catch it and perhaps trying to do something, but what was to be done, though?

There was a memorable film in my teenage years, “Mr Forbush and the Penguins”. John Hurt played Richard Forbush, a biologist who went to Antarctica to study a penguin colony. Forbush had gone to impress a woman back in London, but in the isolation of his existence and the penguins’ struggle for survival, he develops an empathy for the penguins that makes him deeply resentful toward skuas that come to steal penguin eggs and chicks. Forbush is determined to protect the penguin colony and makes catapult to repel the skuas.

“Retribution is near my fine feathered friends. Make no mistake about that,” he declares to the predators. As he attacks the skuas with the catapult, he shouts, “You’ve asked for it, now you’ll get it! Now it’s your turn! You hear me? Go on, get out! Get out! All of you! Die, damn you! Die! Do you hear me? Die! Die!”

Forbush briefly repels the skuas, but as soon as he ceases his onslaught against them, they return and he realizes that there is nothing he can do against nature working in its own way. Forbush would probably have advised that there was not much to be done for a weak crow.

Teenyson’s words about nature being red in “tooth and claw” came to mind, but Tennyson is too poetic, nature is arbitrary and brutal; things live and things die, saving a crow now would only mean it would die later.

Leaving the house about an hour later, the young crow was still there. “Shut up, Forbush”, I thought and walked toward it. Its cries brought a whole flock of crows overhead, shrieking their indignation. “Shut up”, I shouted, clapping my hands repeatedly until they dispersed.

Opening the gate in the wooden fence, I herded the young crow toward the opening. It hopped rapidly through the gateway and onto the lawn. Frantic flapping of its wings allowed it to take to the air, like some primitive aircraft it flew no more inches from the ground until disappearing among the trees where its companions perched in sullen silence.

Of course, it probably had as much chance of survival as one of Forbush’s young penguins had against a circling skua. Accepting nature is a difficult thing.