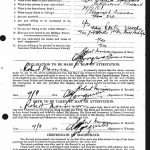 It is almost eight years since I posted here Robert Morrison’s letter of 2nd December 1909. Robert Morrison was my wife’s great uncle.  All that we have from him is a single letter, written from British Columbia, where he was a prospector.  The letter to his brother William was written in 1909, when we thought Robert was 35, though it now seems he was only 28, and had been in Canada since the 1890s.

We had thought that Robert had returned to Ireland to join the British army and fight in World War I.  He is known to have suffered severe shell-shock and is remembered in the 1920s as a pale, gaunt, shadow of a figure. He died while still in his 40s.

Countless hours have been spent searching for more details, and this evening a minor discovery. He had not returned to Ireland to join the army, he had enlisted in Canada. Initially, the records did not tally, the name of the next of kin was wrong, but a search of the 1911 census revealed that the person named as next of kin was actually his sister, whose married name was “Carothers”. One day, we will find the last resting place of Robert Morrison the prospector.

Received your letter some time ago.  Ever so much obliged for photos enclosed and I was very glad to know everything is going so smoothly at home.  So Maggie’s married.  I hope she will be happy.  I expect Molly will be next.  Well, well, it is only a natural course of events, anyway. Is Norah clever?  She looks intelligent in the photo I got, a very prominent forehead.   I expect Annie is still at home, it was strange you did not mention her name in the letter.    You have done a very wise thing in learning the engineering business.  A good trade beats anything, especially out in this western country or western States.  I was down in Seattle at Alaska Yukon Pacific fair and really the bricklayers were receiving seven dollars a day or equivalent to 29 shillings English money.  Don’t you think it is pretty

big money, but then again they’ve very big expenses as it will cost them $1 dollar per diem board, but a trade is the thing in this country.  It is one of the worst countries a clerical man could possibly come to, as it is over run with clerks of all descriptions: farmers and farm help is the cry and if a man is not prepared to do manual labour, it is better to stop out of the country altogether.  I am prospecting for ore in the Selkirk Mountains.  I am about four hundred miles east of Vancouver and one thousand west of Winnipeg.  Sometimes fortune favours me and sometimes not.  Two years, no doubt you’ve already heard of the Great Panic of 1907 which caused so much unemployment in the United States; and of course when that country is in any financial difficulties Canada suffers also.  However, I had some minor claims previous to this panic but had to

sell out  for next to nothing as they were copper and this metal dropped about 10 cents per lb and ruined thousands.  It is going up again and I trust it remains at some permanent point as fluctuations ruins a man with a small claim.

Look Will, if it could possibly be arranged to send Quinn out here I will guarantee to get him work and good pay provided he is willing to work.  Of course when he is out here, he will have to work and work hard, but the pay is pretty encouraging.  Another thing, he will be out of the way, like myself, which means a whole lot more.  If my father is not willing to be under any expense write to me again and I may possibly arrange to get him out here myself. It is maybe better to try and pick him up and the only way is to send him out

to western Canada, the best country in the world for a man who is willing to work.

Will, I am very sorry to hear of so many deaths in Rathfriland.  You were saying that there were a lot of buildings going up there.  I am glad to hear that as it did not look a very progressive town when I was there, but God knows there might be a bright future in store for it.  We have six feet of snow where I am just now.  The season’s fall is between twenty and thirty feet and snow shoes are the order of the day.

With love and kind regards to all