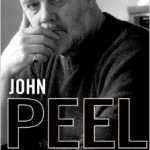 A confession, I only discovered BBC Radio 6 after a friend’s recommendation last week.

Listening to it via my phone whilst driving through Co Laois, I thought John Peel would have enjoyed this evening’s programme. An intelligent presentation of an eclectic selection of music and even a discussion of books that used words not to be found in tabloid newspapers or textspeak, perhaps it was intended for people of an undergraduate age, rather than an ageing parson who remembers going to Glastonbury Festival – in 1979 – but there was no warning that grey haired people should switch to another station. There was a quality of conversation that would have pleased Peel, a presenter who moved from playing music late on weeknights on BBC Radio 1 to presenting “Home Truths” on BBC Radio 4 on Saturday mornings. Perhaps he might have fitted in some passing reference to Liverpool Football Club, but otherwise he would have found little fault.

I never met John Peel, was never present at any event where he featured, was probably never even in the vicinity of anywhere he might have been, but he had a genius for making listeners feel he was talking to them as a friend, a talent for striking up an immediate rapport with whatever audience he addressed. His premature death on 25th October 2004, a date remembered because it was our son’s 14th birthday, deprived broadcasting of a voice that would now be one of its senior statesmen.

Recently re-reading The Olivetti Chronicles, a collection of John Peel’s articles, there was a sense of timelessness in his insights, items from the 1970s might have been written forty years later. Perhaps those younger than a greying middle aged parson may have found quaint some of the references in the earlier pieces, but there is in human character and behaviour a continuity confined to no historic period.

A decade on from John Peel’s death, moving through the media as he did is not easy. Culture has become so fragmented that a shift from one milieu to another is a challenge; figures with the capacity to do as Peel did, to integrate disparate groups and audiences into a single whole, are rare.

Having an online subscription to the Financial Times probably makes this parson an atypical listener to BBC Radio 6, not to mention the fact that I have not lived in the England in which I was born since I was 22, but at a time when the mass media has undergone a constant process of dumbing down, there is encouragement in the thought that on Radio 6 there are still people happy to try to pull us up.