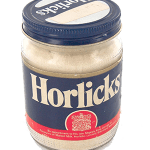 “Horlick’s Malted Milk” is advertised in lettering on the glass fanlight above the doorway of the medical hall in Abbeyleix: it is a reassuring advertisement. Horlick’s was a familiar sight in childhood years, there would always be a jar with a blue label and lid in the larder. Horlick’s was a bedtime drink, it went with warm fires, soft pillows and woollen blankets. Horlick’s meant the family being together, with curtains closed against winter nights. Horlick’s meant a feeling of security, the doors locked and the silence of rural Somerset all around. Horlick’s meant our mother fussing over us and our father checking everything was ready for the morning. Horlick’s jars would never be thrown away, my grandmother would use them for jam and marmalade, their distinctive shape becoming associated with bread sliced thickly from fresh loaves, spread with layers of butter that would show your teethmarks, and then with strawberry jam or coarse orange marmalade.

Horlick’s was an icon of happiness, of feeling safe and well. Such icons seem more important with the passing years. The national railway website for the United Kingdom still use the logo British Rail used in the years when there were train journeys to school or to be with friends. There are still occasional red telephone boxes in English villages recalling those times when having a telephone in the house was not an option for most of us and contact came with a pile of twopence pieces. Grey Massey Ferguson tractors, familiar sights on vintage tractor runs, represent happy memories of our grandfather’s farm. The potential list is probably lengthy, but shortens each time new designs appear. Sometimes it is the most unlikely things that can be reassuring, things like Milo.

As well as Horlick’s, there would sometimes be tins of Milo in the house. Milo was a chocolate drink, it is still marketed in many countries.

Being in the Philippines in 1991, two days drive from Manila, I sat in a deserted dining room of the small hotel in which we had stayed. Home was 8,000 miles away, a three minute telephone call cost £6, and the area we were visiting was beset by violence. Trying to be a good Anglican priest, I sat with a prayer book and Bible and tried to read through the service of morning prayer. To be honest, there seemed not much reassurance in the familiar words, they belonged to another world. I remember turning around and seeing a tin of Milo on a shelf. At once, I was back in the kitchen of my childhood, far from this place where militiamen wandered around with grenades and automatic rifles, far from a country where a week later I would attend a wake for a murdered priest.

I don’t suppose it’s likely that the medical hall in Abbeyleix would stock Milo. Maybe, though, they would have a jar of Horlick’s.