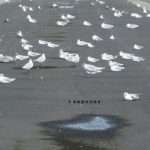 Standing at the gate, there was no sign of life, no sign of vehicles having used the track for sometime; a heavy chain and a large padlock and secured the gate. Climbing the gate and jumping down, fifty-four year old knees protested at the impact of eighty kilograms hitting the floor. The track was once a farm drive, but hedgerows have closed in and grass has covered the surface. Drawing closer to the house, it seems now more trees than house, a car enclosed by weeds stood in front of it.

A caravan stands facing the door of the house. “Hello”, I called. A dog came barking and then shied away. A woman dressed in black emerged from the door. “Hello”, I said, “the sergeant was asking after you”.

She likes the Garda sergeant, he is one of the few people she regards in a benign way. We talked for half an hour, the conversation was hard to follow, a rambling rant against almost everyone she must have known; paranoia combined with outlandish claims. People avoid her, not that she goes out anymore, her hermit-like existence in this isolated place is only possible because of of those who bring her groceries.

Her powers of conversation had slipped since I last saw her, her grip on reality seemed more tenuous, but there seem no grounds for intervention by the statutory authorities. The criteria for intervention are that she be a danger to herself or to others, she is neither: she was dressed in clean clothes and was obviously in good health.  A lonely decline into an imaginary world is not sufficient reason for any doctor to take action.

Perhaps her condition is the peak of a swing of a pendulum, perhaps it is better than the opposite peak  I experienced one Sunday evening in 1992 and on which I have often had cause to reflect. A ward sister at a local psychiatric hospital wanted a clergyman to call, the rector of the neighbouring parish who was Church of Ireland chaplain to the hospital could not be contacted and they were anxious about a patient. A lady from the ward had just returned from the district hospital where she had been diagnosed as having an aneurism. Her life was not necessarily in imminent danger, “she might live on another ten years, on the other hand, she might be gone in ten minutes.”

I had sat at a table and talked to a woman in her eighties; sprightly, but with that slightly pale look that comes from being long years in an institution. She had come from a small coastal village back in the 1930s. Her family had not been large, she knew no-one from the village anymore. She seemed as sane as anyone I knew. On leaving the ward, I went to sign the record of visitors that was kept in the ward office. Apart from the chaplains’ visits, the lady had received no visitors since 1982, some ten years previously. The imminent danger was no more than a danger; I would still see her three years later when visiting the hospital. I never discovered why she had ever come to the huge 19th Century institution that older people in the community still referred to as “the Mental.”

Between the two peaks, isolation or institutionalization, there must be a trough where people have both freedom and care.