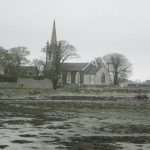 Twenty-six years ago, 27th June was a Tuesday. It was my first day as a rector of a parish.

One of the problems of being in a parish of ninety families with the same people being in church fifty-two Sundays of the year, as many of them were, was finding something fresh to say every Sunday. On one hand there was a danger of being bland and saying nothing, on the other there was the danger that, if one said anything challenging or provoking, someone would take offence and there would be muttering around the parish for the following week.

They were nearly all related – I once asked a man how he was related to another man in the parish. His answer was quite convoluted and sounded something like a second cousin once removed. “Oh”, I said, “I thought the connection was closer than that.”

“Oh, that was on my mother’s side”, he replied, “he’s my first cousin on my father’s side.”

Trying to say things that were challenging, but would not be misunderstood, or taken as personal attacks, was sometimes very difficult. One Sunday I preached on family life being important and upset a lady who thought I was criticising her son who had separated from his wife. The same lady was then upset when I questioned the earnestness of the paramilitary ceasefires, her daughter had married a paramilitary murderer while he was still in prison.

Sometimes there were things that needed to be said, other times offence was caused because I had expressed myself in a clumsy or insensitive way. Re-reading sermons I would realise that I could have said things in a different way. There were times when I was simply unaware that offence had been caused, months later I would get some inkling that someone had been hurt by something. I suspect that on more than a few times offence was taken and I never ever heard about it.

The psalmist says in Psalm 90,

“You have set our iniquities before you,
our secret sins in the light of your presence.”

I think our secret sins include not just the things we have thought or said or done without others knowing, but also the things that are a secret even to ourselves.

In the words of the Anglican confession we speak of sinning against God and our neighbour, “through ignorance, through weakness”. The secret sins, the sins unknown even to us, the unwitting sins we have committed, the hurt and pain we have caused through ignorance and weakness, can cause pain and division to people for years and years.

Ignorance and weakness can be a cause for causing hurt and pain. They cannot be an excuse for doing nothing to change.