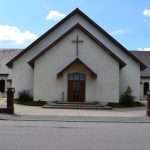 “For what is a man profited, if he shall gain the whole world, and lose his own soul?” Matthew 16:26

Lucy Franks who contributed so much to the life of the Irish Countrywomen’s Association, and whom we remember as a founder here in Castletown, was a woman ahead of the times, nothing seemed beyond her. Records show her crossing the Atlantic in 1958 on an ocean-going liner at the age of eighty, an age which few people reached in the 1950s, and few of those would have contemplated Trans-Atlantic travel. If we look at the ship’s lists for the 1920s and 1930s, we see her journeys to the United States and her occupation recorded as “social worker.” To be a social worker in Dublin in the early years of the Free State would have been challenging and ground-breaking work. We need only look at photographs of life at the times of the Easter Rising and War of Independence to see how difficult were conditions for many people, and they got worse in the years that followed with the Cumann na nGaedheal governments having to implement sharp spending cuts. Lucy Franks could have described lives we can only imagine from the pages of Sean O’Casey.

Lucy Franks led from the front. In 1929, Lucy Franks and Olivia Hughes organised the first summer school in Ireland, the United Irishwomen as the Association was then called rented two wooden huts on the side of Slievenamon: the two older ladies were joined by eighteen younger women, learning skills in the daytime and songs and dancing in the evening. Lucy supported all that improved the lives of rural communities

A hundred years after its foundation, what would Lucy Franks expect from the ICA here in Castletown? Wouldn’t she expect the women here to lead from the front? Where might we lead, though? A century later, so much has changed, life is so much better, what tasks are there for us?

If we take “Lucy” as an acronym, we might think of four areas where we should be active, four areas where Lucy Franks would expect us to do something. L-U-C-Y: loneliness, unsustainable communities, commercialisation and younger people.

L is for for loneliness. There is a difference between solitude, which is good for us all at times, and loneliness. The book of Genesis Chapter 2 Verse 18 says it is not good for a person to be alone, but isolation and loneliness are becoming more a reality than in times past, rural communities are changing and some people are being left behind by those changes. In the spirit of Lucy Franks, we might ask what we as individuals and what we as a branch do in response. A response to loneliness does not demand great resources, but it does demand discernment, sensitivity and initiative, all of which we have here today.

U is for unsustainable communities. It sounds complicated, but we know what it means. A community becomes unsustainable when all of its resources are withdrawn. We see this happening in many parts of rural Ireland: the shops, the pubs, the post offices, the Garda stations, many of them have disappeared. Many sports clubs are struggling, schools have been under threat, rural bus services have been withdrawn, doctors have becom scarce. A point is reached where resources become so few that people begin to move away, younger people need to be near work, near schools, near facilities for their families, so the gravitate towards the towns, leaving behind places that lose their futures. Jesus tells us in Saint Matthew Chapter 25 that whatever we do for others, we do for him. It is our task to defend community life, to defend the things that sustain our communities. Once a community becomes unsustainable, once the people are gone, it is very hard to rebuild it. Let’s stand up for what we have,

C is for commercialisation, a world where all that matters is the bottom line, a world where money and profit are all that count. We see our communities changing as smaller businesses and farmers find it impossible to compete with massive rivals; many farms which once supported families are now only sources for part-time income, small shops cannot match the prices of supermarkets. We can be so caught up with concerns with money that we fail to see that life is about more than what we have in our pockets. I read that if we all spent €5 a week more in local shops, it would keep many of them open; open for when we need them, open for those who cannot travel to the towns, open as places where people are known, where people meet their neighbours. Perhaps the figure of €5 is incorrect, but the principle remains the same.  Jesus asks us in Saint Matthew Chapter 16, what does it profit us if we gain the whole world, but lose our soul? Let’s resist the temptation to accept commercialisation as the only way; let’s keep our souls.

L-U-C, the final letter is “Y” for “younger people.” I heard it said that younger people now do not care, that they are apathetic, that they do not engage with issues, that they have not the motivation of previous generation, and then I watched the referendum; I watched the “home to vote” campaign, I watched tens of thousands of younger people returning to their home constituencies to cast their ballots. Younger people will engage with the issues that matter to them. Without younger people our communities will not have a future; to protect our communities, we need the engagement of younger people. We look back at the work of Lucy Franks and that first summer school and it was younger women who attended because they saw it as direct relevance to their lives; we must re-establish a link with the younger people in our communities. Lest we imagine that all wisdom lies with ourselves, we should remember the words of Saint Paul in Chapter 4 of his First Letter to Timothy where Paul says, “Let no one despise your youth, but set the believers an example in speech and conduct, in love, in faith, in purity.” We have much to learn from those who are younger.