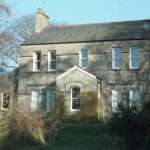 It is Stuart’s 23rd birthday. He was born in Lisburn on 2nd August 1992, it was a Sunday. It being the first Sunday of the month, there had been a single service at 11 am for the three churches in our parish, a hundred or so of our two hundred and fifty parishioners would have attended. After lunch, I had driven to the hospital to see Stuart’s mum and her new arrival, there was a degree of urgency because we were leaving for our four weeks of annual holidays the next day and I was anxious to visit before we left. The final packing of the car had been interrupted in the evening by a call from a nursing home in Downpatrick to visit a member of a neighbouring parish, the working relationship with the neighbouring rector was so cordial, and our communities so close knit, that we would regularly have received calls for the other if the person sought was unavailable.

At six o’clock the next morning, we left for Larne, catching a ferry at eight and crossing Britain for an evening sailing from Felixstowe to Zeebrugge. Thereafter, the hour by hour recall disappears.

Is it the case that all memories could be recalled, but it is just that they are not? Attending an Open University psychology lecture in a year I cannot remember, the lecturer was talking about memory. He suggested that it might be possible that the brain retained everything we ever heard. (This had seemed doubtful even at the time, I couldn’t recall what the lecturer had said in his previous point). The problem, he said, was in recalling the information from the depths of the memory.

Wanting clarification, I asked him a silly question. “Does this mean that if I listened to the football results on the radio in October 1974, somewhere in the depths of may brain are all of West Ham’s scores?”

Why can I recall the deep red colour of our Renault 21 parked under the trees in the driveway of our fine Victorian rectory when I frequently cannot remember where I was a week ago? Recall is an odd thing.