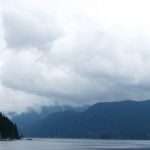 A telephone call yesterday confirmed that a lay reader from the neighbouring county could take a service usually taken by one from our own parish. “We are going out to Alberta.” she had said.

“The weather is good there in the fall,” I smiled.

“Indeed.” she has laughed, catching the allusion to Neil Young.

Is there a correlation between space and contentment? Do wide open rural acres lend themselves to a more mellow view of life? Or, if not mellowness, an inclination to let things be, to turn away from arguments, forget conflicts? Listen to the inimitable Neil Young singing “Four Strong Winds”, and there is a sense of geographical openness contributing to a sanguine mood.

Only when visiting Canada is there a sense of the sheer vastness of the place. The whole of France would fit into Alberta and there would still be 100,000 square kilometres to spare, France has a population of 63 million, that of Alberta is just 3.6 million.

The song’s journey to Alberta is a journey into a province that has two major cities surrounded by a vast spaciousness; space to work, space to be oneself, space not to worry, to be unconcerned, unburdened, free. The lyric expresses regret that things have turned out as they are – and an acceptance that what is done is done, that the past is unchangeable and demands now a letting go in an openness that will allow forgetfulness.

The greyness of the emotional autumn is contrasted with the sunshine of the provincial fall. A friend who spent thirty years in the hugeness of Ontario once complained of the darkness of Irish winters. It seemed an odd complaint, our latitudes were not so different. “It is not the night”, she explained, “it is the day. In Ontario there would be days of brilliant sunshine reflected by brilliant white snow; in Ireland the days are just grey, half-lit.”

Perhaps it is about more than spaciousness, perhaps it’s about direct engagement with the elemental world, a world unmediated by technology or human construction; there is a sense in nature of timelessness and the insignificance of the affairs of the human world. Every last person could be dead, and the trees would still stand, and the birds fly, and the autumn winds chill the September air.

Perhaps it is also about journeying, about covering physical ground, about placing actual, real distance between oneself and whatever it may one is travelling away from; even with 63 million people, France can still allow journeying and manage space. To stand at an anonymous service station, on the southbound carriageway of an autoroute, in the warmth of a fine autumn day, with only contentment ahead, would be a prospect as tempting as Alberta. A prospect so tempting that tomorrow evening we sail for Cherbourg.