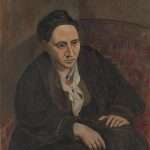 In 2011, the San Francisco Museum of Modern Art held an exhibition, ‘The Steins Collect‘.  It cost $25 to see it, (making us appreciate how much it meant to have free galleries in Ireland), but the exhibition of the works of Picasso and Matisse made it money well spent.  The Steins certainly had collected, Gertude and the other Stein family members had been gifted with an extraordinary artistic prescience.

Gertude Stein’s sexuality was to contribute to a rift with her brother Leo. It was a rift prompted also by disagreements over art and by personal envies. Leo objected to Cubism and when the family rift brought Leo’s departure from the house, the works by Matisse went with him, Gertrude kept those by Picasso they had purchased.  There was a personal inclination to feel that Leo had done best from the deal, there was also a failure to appreciate the courage it took for Gertrude to choose the Picasso works over those of his more conventional French rival.

It was only in reading a passage of Gertrude Stein’s The Making Of Americans today, more than four years after seeing the exhibition, that there was a realization that it took courage to choose the unconventional:

It is a wonderful thing as I was saying and I am now repeating, it is a wonderful thing how much a thing needs to be in one as a desire in them how much courage any one must have in them to be doing anything if they are a first one, if it is something no one is thinking is a serious thing, if it is the buying of a clock one is very much liking and everybody is thinking it an ugly or a foolish one and the one wanting it has for it a serious feeling and no one can think that one is buying it for anything but as doing a funny thing. It is a hard thing to be loving something with a serious feeling and every one is thinking that only a servant girl could be loving such a thing, it is a hard thing then to buy that thing. It is a very wonderful thing how much courage it takes to buy and use them and like them bright colored handkerchiefs when every one having good taste is using white ones or pale colored ones when a bright colored one gives to the one buying them so much pleasure that that one suffers always at not having them when that one has not bought one of such of them. It is a very difficult thing to have your being in you so that you will be doing something, anything you are wanting, having something anything you are wanting when you have plenty of money for the buying, in clocks in handkerchiefs, so that you will be thinking, feeling anything that you are needing feeling, thinking, so that you will be having aspirations that are really of a thing filling you with meaning, so that you will be having really in you in liking a real feeling of satisfaction. It is very hard to know what you are liking, whether you are not really liking something that is a low thing to yourself then, it is a very difficult thing to get the courage to buy the kind of clock or handkerchiefs you are loving when every one thinks it is a silly thing, when every one thinks you are doing it for the joke of the thing. It is hard then to know whether you are really loving that thing.

If the purchase of an unconventional clock, or the use of a brightly coloured handkerchief, was a hard decision, how much harder was it to defy convention in other, more serious, ways? I looked at my bright red socks and felt them appropriate attire for reading such words, and then thought of the courage demanded of Gertrude Stein in the choices she made. Who in their time would have dared to have been like Gertrude Stein and Alice B. Toklas?