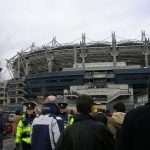 If Peggy had been with us, today’s Dublin versus Kerry All Ireland football final would have been watched: Peggy was not typical of the tradition from which she came.

In the 1980s, Northern Protestants, particularly those born in the 1920s, tended not to take much interest in Gaelic games. When the only television channels available were the four British ones, the possibilities of a chance encounter of coverage of matches were limited, but two matches each September were deemed worthy of broadcast – the All Ireland football and hurling finals.

After a substantial roast dinner at Peggy’s table,the two Sunday afternoons would be spent watching the respective fixtures. The sight of green and gold jerseys of Kerry, a sight that was expected in those years, would prompt Peggy, a woman from a strongly Ulster Unionist family, to ask if Mick O’Dwyer would be there.

Mick O’Dwyer was probably the only name in the whole of the Gaelic Athletic Association Peggy would have recognized, and, indeed, he would definitely have been there. Having been a successful player, O’Dwyer was manager of the Kerry team from 1975 until 1989. In twelve years, the county appeared in ten All Ireland finals, winning eight of them. O’Dwyer’s Kerry team were the greatest in the history of the game.

The O’Dwyer name would prompt her to reminisce upon family holidays in the Kingdom in the 1960s, particularly the time the car broke down and the O’Dwyer family garage in Waterville provided them with generous assistance and a small bill. It was a story that seemed worthy of a man who was already a legend in his forties.

I am sorry Kerry lost today, for Peggy’s sake, I am sorry. She would have been pleased if Mick O’Dwyer’s side had won.