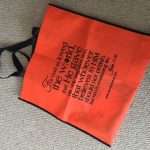 There were hundreds of people at the National Ploughing Championships walking around with bright orange carrier bags, the bags bore not the name of any company, agency or organisation, but a verse from the Bible. In black lettering on the orange background were words from Saint John’s Gospel Chapter 3 Verse 16, “For God so loved the world, that he gave his only begotten Son, that whoever believes in him should not perish, but have everlasting life.” An evangelical Christian group were handing out the bags free to anyone who wanted one, and there seemed no shortage of people happy to walk around with words that have been described as the Christian gospel in a single sentence.

Walking among the tens of thousands of people attending what is claimed to be the biggest outdoor event in Europe, one might have wondered whether the words from a two thousand year old book had any practical connection with the daily business of farming. Were they not just a religious slogan, without any practical application to the hard realities of earning a living through agriculture?

Maybe though, there is a stronger connection than either government, or business, or farmers, or even Christians, would be inclined to acknowledge. Saint John Chapter 3 Verse 16 is about grace, it is about God giving something for nothing, it is about God giving something to people who do not deserve it. Christians are supposed to be people who believe in grace, though there are few who would be happy to demonstrate the sort of generosity that God shows. What if one applied the idea of grace to agriculture?

There has been an attitude of grace towards farming. Because Europe has been concerned to ensure a secure supply of food at a cheap price, because it has been concerned to maintain rural communities and sustain the rural environment, it has had a system of direct payments rewarding farmers for being farmers, paying them not on the basis of what they have done, but on the basis of what they have been. While there have been abuses and anomalies, in principal, it has been a good system, it has protected the weak and vulnerable in our societies from the impact of high food prices and it has conserved the rural environment.

But the economics of grace are coming to an end, agriculture has increasingly become about business, and big business, at that. Machines costing hundreds of thousands were on show at the championships, technology for further reducing the manpower needed was being demonstrated. Small farmers will be unable to compete and even the farm payments in the future are going to be focussed increasingly upon the larger farms, as is already the case in Britain.

Most Christians will be untroubled at the thought, but, as people who believe in grace, there should be concern at what is happening. If the Christian faith rests upon grace, then shouldn’t Christians seek to bring that grace into the societies in which they live? As followers of one who declared the futility of gaining the world and losing one’s soul, shouldn’t there be a seeking after his kingdom and his righteousness? A countryside without grace will be one filled with dying communities and marginalised people; it will be one where all the wealth is in the pockets of a few; it will be a recalling of less happy times in Ireland.

If the orange bags do anything, they should call us to have a sense of grace, both personally and economically.