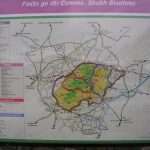 The following impressions of the community of Camross were written for a local publication.

Growing up in rural Somerset, where there were no street lights in our village and where the nearest bus stop was three miles away, Co Laois seemed a familiar place. Small villages and farms scattered across a gentle countryside were not much different from the Glastonbury area in which I spent my childhood, what was different was the Slieve Bloom mountains and Camross parish set in the hills below the mountains. The Slieve Blooms made Camross a place apart, a community tucked into the landscape that would go unnoticed by someone speeding on their way from Dublin to Limerick.

Working in a parish demands knowing where everyone lives and Laois came as a shock after ministering in the North, where every house whether rural or urban, has a number and is on a road with its own name, and in Killiney in Co Dublin, where it was possible to walk across the parish in twenty minutes. It was a case of learning townland names and learning where each parishioner’s house was in each of the townlands. There must have been moments when my little silver Peugeot caused suspicion, passing up and down the same road three or four times as I searched for someone’s house.

Arriving in the spring of 2010, when the previous January had brought the worst winter conditions since 1963, there had been a hope that one bad winter could not be followed by another. Our worst fears were fulfilled when Christmas brought the coldest temperatures most of us could ever remember. As pipes froze and roads became passable with difficulty, ordinary life became a challenge. The greatest difficulties were faced by the farmers trying to get water to livestock, no-one living in a city could really have appreciated how hard the business of ordinary life had become for people living in places like Camross. There was one day when I had been invited to the official opening of the motorway near Borris-in-Ossory and an official phoned from Dublin to say that the roads were too dangerous for the minister to travel, later that day I visited a farm in the parish where the farmer was working, in temperatures well below freezing, to get water to his herd with hoses from the house. I wondered what would have happened in the country if we had all taken the attitude of the official.

If the weather during that first winter was cold, the spirit among the people of the parish has always been warm. The Church of Ireland community in the parish of Offerlane, with its churches at Annatrim and Lacca, numbers only a hundred and sixty people, but we have always received great support and encouragement from the Catholic community around us. Good neighbours have been with us in sad times as well as happy ones and we have been blessed with kind and genuine friends. Actions always speak far louder than words and the generosity of the community has been a great testimony to the warmth of its spirit.

Sometimes it is easy to work in a place and to miss its beauty, to become so used to the roads along which we pass every day that we no longer notice what is around us. The passing of the seasons brings a constant changes in the colours of the woodland of the parish and the appearance of the Slieve Blooms. On the odd occasion, when there have been five minutes to spare, I have pulled into the car park at Lacca bridge just to spend a few moments contemplating the trees and the river and to enjoy the tranquility. The Russian writer Dostoevsky once wrote about beauty saving the world: perhaps that is not possible, but perhaps beauty makes us happier than those who live in places we would think were drab.

Happiness, for me, has been a hallmark of Camross. Community life is vibrant, there is always something happening, social, cultural and sporting events are always providing news stories for the local media; musicians and tractors and hurlers and dancers combine with numerous other activities to create a constant mood of expectancy (when the parish mission took place and there were representatives of every organisation, it became clear just how much was happening). Reaching the age of retirement in Camross seems simply the beginning of a whole realm of new possibilities, a chance for gathering with friends and enjoying life for years to come.

A personal reflection on Camross would not be complete without a word of tribute to Fr John Lalor. In a time when parish priests are becoming scarce, Camross has been blessed in having Fr Lalor for more than a quarter of a century. Fr Lalor has been a tremendous community leader who has had the courage to have great vision for the parish and to work to fulfil that vision. Perhaps it was only during his time of illness that it was fully realised how important he was to the life and progress of the community, may he be blessed with health and vision for years to come.