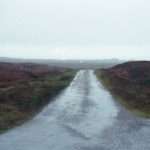 There was a man standing at the roadside with a bag, he put a thumb out to each passing vehicle with no success. Once, I would have stopped for him. In times more dangerous than these, I would have picked him up, but, with advancing years, caution has taken over. But didn’t giving lifts once provide stories to tell, stuff about which to write?

It is ten years today since I wrote of Jim. It had been a June day in 1988 when I was driving out of Galway after doing some shopping, I had picked up a hitch-hiker and talked with him as we drove along. It turned out that he was an artist who made a few pounds by selling pictures of Galway scenery. He lived in a cottage halfway up a mountain in part of Co Galway. We talked about this and that and, given the fact I was wearing a clerical collar, we talked about religion; he said it was something he could not accept.

When we had reached the turning off the main road for his cottage, I said I would drive him up. I had a little red mini Metro and I had to coax it up a winding mountain road. When we reached the cottage, the man offered me coffee, and because I was curious about him, I accepted.

The cottage had been as I expected. There was a stone floor, embers still glowed in the open fireplace; it was not very clean, the clothes strewn around the place included some that presumably belonged to a young woman, and the dishes were dirty. Apart from a fridge, a kettle and a cassette player, the place could have been straight out of a museum.

The man’s name was Jim and he sat and talked about what had brought him to a cottage on a mountainside in Co Galway. He had grown up in a Republican area of Co Tyrone. His father had gone to jail for membership of the IRA. From an early age, he had been under pressure to support the cause. He couldn’t agree with the rest of his family, so he left home and school and drifted.

I had asked him if he went home at all. Every couple of years, he said, but it was painful. Going home meant threats because of the people he mixed with and because he refused to support his family’s beliefs. Two of his brothers were in the Maze prison, serving long sentences for terrorist offences. He could not understand it; one of them had travelled to visit him in Cork, and had seemed so ordinary; two days later he was caught planting a bomb.

Jim had no time for religion or the church or anything to do with them—he saw the church as destroying the life he thought was important. Jim lived a life outside of the law and outside of society. He spoke warmly of the kindness and care he had received from people he had never met before. He talked about how he was trying to help a friend through addiction problems. He picked up a puppy from the floor and cuddled it and thanked me for the lift. As we walked to the car, he said he hoped I would call again. As my car bumped back down the road, I had wondered about it all. I had never called back.

Not picking up hitch-hikers, there are no opportunities to meet Jims. Perhaps they no longer exist, or perhaps they know better than to seek lifts from people who just pass them by.