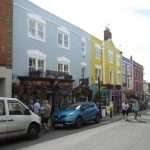 A photograph on the Wall Street Journal website had a familiar look – it was Glastonbury Tor. Admittedly, it was Glastonbury Tor as the foreground to the orange-tinted Moon that was in the skies last night, but the choice of the Tor by Matt Cardy of Getty Images was presumably intended to create a particular atmosphere around the appearance of the “supermoon” and the eclipse that followed. Supermoons have a straightforward scientific explanation, they are just occasions when the orbit of the Moon brings it closer to the Earth than usual, creating the impression that the Moon is much larger; similarly, lunar eclipses are the consequence of the Earth coming between the Sun and the Moon. Despite the simple explanations for the phenomena, the photographer knows that the choice of location will imbue the image with a particular “mystical” quality, an assessment that was obviously well-judged for the media outlets that took the image included the Daily Telegraph as well as the Wall Street Journal.

The fascination the Tor has for people continues to be baffling. It is a church tower on top of a hill in the Somerset Levels. It was the scene of the hideous execution of Richard Whiting, the last abbot of Glastonbury in 1539, when Thomas Cromwell seized the assets of the abbey on behalf of the Crown and had Whiting killed for daring to oppose the dissolution.

Glastonbury became a place of pilgrimage after the monks invented stories regarding Joseph of Arimathea bringing “holy relics” to the place (and if the stories were not invented, why is there not a single shred of credible historical evidence?) The traditions created by the monks were to be augmented by the hippies of the 1960s who saw Glastonbury as a place of mystical significance, they talked about “ley lines” and all sorts of other esoteric things.

For me, the real Glastonbury was never more than a country town. In my childhood years, it was more associated with the sheepskin industry, and with a fair in September and with a great carnival each autumn, than with anything mystical. In my youth, Glastonbury was a place where we attended discos in the local rugby club and where there was a good juke box in one of the pubs, it was a place where friends lived and where ordinary things went on as they did in any other place.

Standing on top of the Tor last month, there was a certain sense of regret that the town that had been associated with so many happy memories seemed to have disappeared. Photographs of supermoons only add to the esoteric perceptions.