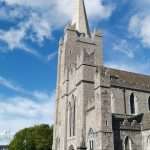 Four words from today’s Gospel reading beginning with the letter “g” can help us reflect on what it might have to say to us: grant, glory, great and give.

If we read chapter nine of Saint Mark’s Gospel and the earlier verses of chapter 10, we see Jesus talking to his followers about the sort of people they should be, they should be like little children, they should put others first, they should not seek things for themselves. How must Jesus have felt, then when he is approached by James and John, men who had been with him for three years, with the request they make in Verse 35, “Teacher, we want you to do for us whatever we ask of you.” Had they paid any attention to all of the previous conversations? How could they have seen and heard all they had and have still asked, in Verse 37, “Grant us to sit, one at your right hand and one at your left, in your glory?” “Grant us”; not a question as to who might occupy such places, not a question as to whether they might occupy such places themselves, but “grant us.”  It is not followed by a word like “beseech”, or “beg”, or even “please”, simply “grant us.” James and John seem to assume they have a right to request such places.

Are James and John so far removed from the attitudes of people today? We live in a culture of “rights”, where people assume they have a right to request whatever it is they want, where consumerism has turned almost every aspect of human life into something that is a commodity. Imagine if Jesus’ ministry were taking place today, there would be media commentary on James and John and how they deserved their places; there would be a Facebook group supporting the sons of Zebedee in their request for the seats. Are we like them? Do we expect God just to “grant” what we ask?

The places sought by James and John are in a kingdom to come. Verse 37 says, “one at your right hand and one at your left, in your glory.” What do they mean by “glory?” Do they know themselves what they are seeking? Jesus has doubts if they understand their requests, telling them, in Verse 38, “You do not know what you are asking. Are you able to drink the cup that I drink, or be baptized with the baptism that I am baptized with?” Despite all that Jesus has said, despite all his warnings about what lay ahead when they reached Jerusalem, do James and John still believe that Jesus will be the all-conquering hero, the one who will drive all the enemies from the country? Jesus warns them in Verses 39-40, “The cup that I drink you will drink; and with the baptism with which I am baptized, you will be baptized; but to sit at my right hand or at my left is not mine to grant, but it is for those for whom it has been prepared.” At which point the discussion ends and we do not discover what James and John imagined “glory” to be; whatever it was, it was something in which they firmly believed.

How many people today would share the belief of James and John? How many people, even within the church, believe there to be a hope for “glory” in the future? Does it all sound too medieval? Without a hope of glory, though, why do we have a church in the present time? What would be the point of it all if our only hope was for this world? Isn’t the life of the church nonsensical if we have no belief in a life everlasting? We might be as erroneous as James and John in our understanding of glory, but without a hope of it, wouldn’t we do better just to go home?

Grant, glory, the third word is “great”. Jesus had taught his followers in plain and unmistakeable terms that pursuing human ideas of “greatness” had should  have no place among his followers. James and John cannot have misunderstood, rather they have simply ignored what Jesus has said, it is an attitude that annoys the other disciples, Verse 41 telling us, “when the ten heard this, they began to be angry with James and John.”  Jesus might reasonably have felt he had already said all that was needed, that they could not fail to be aware of what he expected, but, as a parent trying to yet again explain something to troublesome children, he tells them they are not to be like the rulers of this world, instead, in Verses 43-44, “whoever wishes to become great among you must be your servant, and whoever wishes to be first among you must be slave of all.”

We should not find fault with James and John, the church has spent twenty centuries since ignoring Jesus’ teaching about becoming as little children and becoming least of all; the church became a place for ambition and power. What is noticeable is that the secular world seems to have a better understanding of what Jesus was saying than does the church; in secular culture the Christians regarded as “great” are those who were the most powerless, people like Mother Theresa, Martin Luther King, Alexander Kolbe, Dietrich Bonhoeffer. In the court of history, I wonder how the church of our own times will be judged?

The final word beginning with “g” from the gospel reading is “give”. In Verse 45, Jesus says, “For the Son of Man came not to be served but to serve, and to give his life a ransom for many.” What did the disciples make of these words? Jesus had warned them three times in quite plain terms of what awaited, but the way events unfolded suggest they could not or would not understand. Given their background, it would have been alien for them to think that faith would mean trusting in what someone has done for you rather than what you have done for yourself through keeping the Law. The concept of grace was one that they had to learn, that God might give something to those who did not deserve it was difficult to understand.

God’s gift, his grace, is no more readily understood now than it was then. In most churches, there is not much sense of grace, not much sense that we all stand equal with even the worst of people because none of us deserves what God has done for us. Try to talk about grace in most parishes and people do not want to hear, yet without a sense of grace, the church just descends into legalism and self-righteousness. Sometimes one can imagine people telling Jesus himself that his ideas were very nice, but not at all practical. Grace is too much for us.

Grant, glory, great and give: four words to ask us about our church, our faith, and our hope.