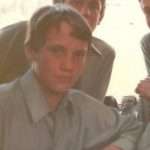 It is my fifty-fifth birthday tomorrow. There are few birthdays I remember, but I remember my fifteenth birthday, forty years ago.

At the boarding school I attended because of my chronic asthma being fifteen meant being greeted in the morning by a gang of boys who carried you off to drop you into a cold bath; or being taken by the arms and legs and being swung three times before being hurled down a big grass bank. There was a lack of interference from a housemaster the day I was fifteen, and I got both treatments.

I was never sure why being fifteen was such a big occasion during school days. I think back in the 1970s being fifteen was still remembered as the age at which you could leave school. By 1975, being fifteen meant there was still another year at school. It was possible to leave at the Easter holiday following your sixteenth birthday and a good number of those in school would have taken that opportunity (we weren’t very academic).

Two generations prior to me, fifteen was an age at which more boys than the authorities would care to admit were away in the trenches. I had an old uncle who died in 1971. He had been born in 1900, went off to the Western Front in 1916, and became a German prisoner of war that year. He was to return home in 1919, having been assumed to be dead. A teenage boy, he walked back through the chaos of post-war Europe from the coalmines where he had been working as forced labour. He had no papers and rags tied round his feet served as shoes. In times when the school leaving age was fourteen, it would not have been considered so outrageous for a fifteen year-old to have been in the army.

Two generations prior to uncle Jack, in the middle of Victorian times, the Government was having to pass laws regulating the working conditions of children; trying to safeguard children who were ten and under.

Had I been asked in 1975, what it would be like to be fifty-five, it would have been a thought that was unthinkable; fifty-five was an age we would have thought was old, my grandfather was only sixty-one. At a time when there is much concern that young people are becoming older younger, it is encouraging to note that in many ways we are staying younger older.