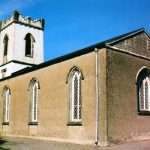 “Lord, already there is a stench because he has been dead for four days.” John 11:39

The story of the raising of Lazarus is strongly sensory; it seems apt to consider the passage by thinking about the five senses and about what each of the sensory experiences has to say to us on this All Saints’ Day.

The story begins with the sense of sight. Saint John Chapter 11 Verse 32 tells us, “When Mary came where Jesus was and saw him, she knelt at his feet and said to him, ‘Lord, if you had been here, my brother would not have died.'” When Mary “saw him”: seeing, for Mary, is believing. Only when Mary’s eyes tell her that Jesus is physically present does she believe that he can change things. Seeing him, she expresses confidence in him, Lazarus would not have died if Jesus had been there. The arrival of Jesus brings change, it brings hope. Seeing Jesus meant people felt differently.

We cannot share Mary’s experience, we cannot see Jesus walking into our village, but Jesus tells Thomas not to rely on sight. In Saint John Chapter 20 Verse 29, Jesus says, “Have you believed because you have seen me? Blessed are those who have not seen and yet have come to believe.” We have come to believe without seeing, we have come to believe without the physical human presence of Jesus that Mary saw, or the resurrection body that Thomas saw, but we can have confidence that Jesus can change things, as he did in Bethany. On this All Saints’ Day, we believe that those we remember, but see no more, are alive in the presence of God.

The sense of taste that appears in the story is the salty taste of tears. Verses 33-35 tell us of the weeping of those who mourned the death of Lazarus. We read, “When Jesus saw her weeping, and the Jews who came with her also weeping, he was greatly disturbed in spirit and deeply moved. He said, ‘Where have you laid him?’ They said to him, ‘Lord, come and see.’ Jesus began to weep.” The death of the young man Lazarus has left them with a bitter taste. The crowd watch Jesus for any reaction or feeling he might show. The tears of Jesus prompt sympathy, “See how he loved him!” says some in Verse 36, but the tears bring only a cynical reaction from those in Verse 37, “Could not he who opened the eyes of the blind man have kept this man from dying?” Perhaps the taste of tears affects Jesus, for Verse 38 tells us, “Then Jesus, again greatly disturbed, came to the tomb. It was a cave, and a stone was lying against it.”

Are we people who are moved by tears? Are we sometimes people who are moved to tears? Jesus stood alongside those who mourned, he shared heir pain, as we believe he does for each of us. Does the taste of tears help us to understand the feelings of those whose grief and pain is great? On a day when we remember all who have led saintly lives, the saltiness should remind us that we are called to be like salt in our own lives, to make the world a better place, to ward off that which is wrong and to preserve that which is good.

The sense of smell confirms the reality of what has taken place. In Verse 39, Jesus says, “Take away the stone,” but Martha warns Jesus, “Lord, already there is a stench because he has been dead for four days.” Martha’s words tell us that Lazarus is definitely dead, that this is no case of someone being unconscious and then reviving. In the heat of the daytime, the smell would have been overwhelming, but Jesus is confident that the reality of the situation will be changed, in Verse 40, he asks, “Did I not tell you that if you believed, you would see the glory of God?”

Martha’s sense of smell reminds us that death is not pleasant: death is the enemy. Saint Paul writes in the First Letter to the Corinthians Chapter 15 Verse 26, “The last enemy to be destroyed is death.” All Saints’ Day reminds us that dying and decay do not have the victory, that, in  words from the Book of Revelation Chapter 21 Verse 4, “Death will be no more; mourning and crying and pain will be no more.”

The sense of hearing is spoken of by Jesus. In Verses 41-42, we read, “So they took away the stone. And Jesus looked upwards and said, ‘Father, I thank you for having heard me. I knew that you always hear me ‘” Having acknowledged that his Father always him, Jesus says to his Father that he must now speak so that the crowd will hear him, he tells his Father, “I have said this for the sake of the crowd standing here, so that they may believe that you sent me.” There must have been an expectant silence as the crowd watched Jesus. What was he going to do? The grave has been opened, what could possibly happen? There might have been whispers, but hardly anything more as they waited. Then, Verse 43 tells us, Jesus “cried with a loud voice, ‘Lazarus, come out!'” What thoughts must have filled the minds of those standing there?

The final sense is that of touch, it is an important part of the story. Verse 44 says, “The dead man came out, his hands and feet bound with strips of cloth, and his face wrapped in a cloth. Jesus said to them, ‘Unbind him, and let him go.'” This is not an apparition, this is not some ghost called from the grave, this is not some imagined vision, it is a flesh and blood person. Lazarus is still wrapped up in the grave clothes, he has to be physically freed from these garments of death. The sense of touch confirms that it really is Lazarus.

Sight, taste, smell, hearing and touch – five senses reminding us of our faith this day.