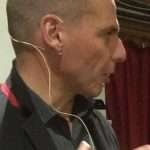 “Yanis Varoufakis, the former Greek finance minister was speaking in the cathedral.”

“He wasn’t speaking about finance though, was he?”

“He was, it was part of the annual economics festival.”

The church sees fit to make pronouncements about all sorts of matters, it regards anything touching upon sexuality as its own special preserve, even indicating how it thinks people should vote, it talks about environmental issues, it expresses opinions on how history should be viewed, it is prickly in its defence of its role in education, but when it comes to economics? Silence.

“Ah”, say the clerics, “we do not get involved in politics.”

It is a claim that is patently nonsense. The Church of Ireland has been vigorous in its involvement with constitutional politics, the services held by the loyal orders in Northern Ireland being the most visual example of church bias toward a particular political tradition. The Church of Ireland is actively engaged in gender politics, sending a group of men to Stormont to articulate church views on abortion and declining to implement any reforms that would create a gender balance on its numerous boards and committees. The Church of Ireland stands Canute-like against the tide of change in sexual politics, the House of Bishops being dismissive of the marriage equality referendum in May. Any suggestion that the church does not become involved in politics is plainly contradicted by the text of the reports the church publishes each year.

Even the idea that the church is not involved in the politics of finance and economics is silly. Look at the tens of millions invested in the stock markets, the returns on which are reported at the general synod, the church’s annual general meeting.

The politics that the church labels as “party,” and therefore something that it does not want to discuss in public, is the politics that challenges the interests of anyone who is powerful. We do not mind offending groups who have not the power to hurt us, but we cannot risk offending those who might hit back. Churches in Northern Ireland hosting speakers who attack gay and lesbian people are not considered “political,” but if a church hosted a radical politician who spoke of bringing the rich and powerful down from their positions and advocated raising up the poor and the vulnerable, then that would be “political” and would be met with a barrage of criticism, (even if the language used was from the second chapter of Saint Luke’s Gospel).

Perhaps the pity is that Varoufakis was not speaking at a church event, it might have called us back to the Bible, which has a great deal to say about economics and very little about the sexual matters that so preoccupy us. 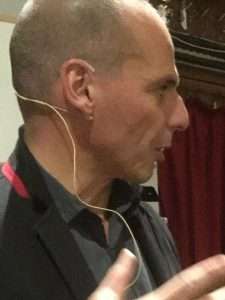