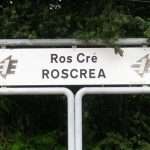 I drove into Roscrea today, for no reason other than I was passing it by and it was there, and that for thirty-five years it has had a mythical place in my imagination.

Thirty-five years ago, I had dropped out of university and in searching for something had found voluntary work at a special school run by the Sisters of the Sacred Heart of Jesus and Mary at Cranleigh in Surrey. At the end of the school year, the sisters were departing from the school and the one with whom I worked was moving from the Home Counties to Roscrea.

Roscrea could even come up in conversations. Being the more or less the only town of which I had heard, when people would ask if I knew anything of Ireland, I would say that, apart from the cities, the only placename I knew was “Roscrea.” There was a student party at which I met Arthur; an Irishman who had once taken pigs to the market in Roscrea and was a Catholic, though, as he pointed out, that didn’t demand much guesswork. That is, him being a Catholic didn’t take much guesswork. His journey with the pigs was the only time he had visited the north Tipperary town; it would have demanded prescience comparable to that of Sherlock Holmes to be able to say, “You look like a man who once took pigs to Roscrea.”

Two years later, I encountered Roscrea for myself. For my wife’s family, it had been the place where they would stop overnight on the long journey from Belfast to Kerry, her father carefully mapping out the route through a pre-motorway Ireland where even the smallest of towns might present unforeseen delays. He would reckon on averaging forty-three miles per hour as they travelled away from a place that was another country towards Stanley’s guest house on the road out to the monastery. So it was that on a journey northward in 1982, Katharine and I decided to pause overnight on the borderlands of Munster and Leinster.

Perhaps summer holiday encounters colour impressions, but it was a town filled with magic. Medieval buildings, brightly painted shops, eccentric motoring, and the warmth and laughter of a welcome worthy of any story book.

Apart from Christmas cards each year from the religious sister with whom I had worked, Roscrea disappeared from consciousness for more than a quarter of a century. Only in 2010 when I moved to Laois did its presence re-establish itself.

In the five years since, Roscrea’s place in my imagination has not changed, it is still the mythical place from the mind of a twenty year old, still a place from where the road might take one into the unanticipated, still a place of a distant summer evening. And today, on the greyest of November days, there was still a hope of catching a glimpse of a man called Arthur with a trailer of pigs. 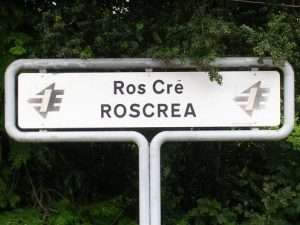