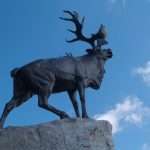 Anyone who has lived in Ireland must have pondered the huge attendances at wakes and at funerals; the huge reverence shown for the dead and their burial places. Anyone who has ministered in Ireland might have wondered  about the need to try to construct an Irish theology, to present the Gospel in such a way that it makes sense to each person in the crowds that gather on such days.

We are not good at such thinking, the idea of contextualisation always brings memories of the Huron Carol. Its tune is familiar to me from childhood days. It was one of those songs that would have featured in the autumn term of BBC radio’s schools music programme Singing Together. At our Primary School there was a big wooden valve wireless, which remained permanently tuned to the frequency for the schools broadcasts.

Having been blessed with the lifelong inability to sing, Singing Together never really captured my imagination. The BBC songbooks were handed out, a new edition for each term, and we were all expected to pay close attention to the presenter. I don’t remember a single thing about the programme, but a few of the songs still stick in my head, “Land of the silver birch”, “It’s raining again” and “The praties they grow small”. I think we might have been allowed to vote for our favourite song in a nationwide poll, but that might be something my memory has embroidered.

I wish I had paid attention to the Huron Carol because the words are special. The carol, which is set to a French Canadian tune, was written by Fr. Jean de Brebeuf, a Jesuit priest in Quebec, in about 1643. He attempted in a simple song to tell the story of Jesus in terms meaningful to the Huron people.

‘Twas in the moon of wintertime when all the birds had fled
That mighty Gitchi Manitou sent angel choirs instead;
Before their light the stars grew dim
and wondering hunters heard the hymn,
Jesus your King is born, Jesus is born , in excelsis gloria.

Within a lodge of broken bark the tender babe was found;
A ragged robe of rabbit skin enwrapped his beauty round
But as the hunter braves drew nigh
the angel song rang loud and high
Jesus your King is born, Jesus is born, in excelsis gloria.

The earliest moon of wintertime is not so round and fair
As was the ring of glory on the helpless infant there.
The chiefs from far before him knelt
with gifts of fox and beaver pelt.
Jesus your King is born, Jesus is born, in excelsis gloria.

O children of the forest free, O seed of Manitou
The holy Child of earth and heaven is born todayfor you.
Come kneel before the radiant boy
who brings you beauty peace and joy.
Jesus your King is born, Jesus is born, in excelsis gloria.

Most of the Church still has not caught up with Brebeuf; we still believe we can tell the story of Jesus to our own generation using the language of 4th century Greek philosophy. What would Brebeuf have said to about our attempts at theology today? 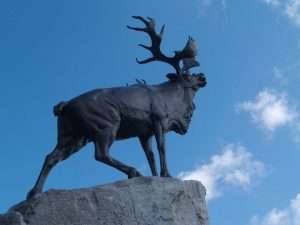