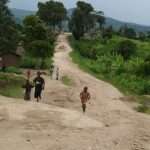 Looking at a map, the distance does not seem very far. The main road for around fifteen kilometres and then, according to the driver, eleven kilometres on a regional road. The first part of the journey took around twenty minutes, even on tarmac roads journeying in Africa can mean encountering unforeseen delays. The second part was on a dirt track where the rainy season had hollowed out holes and gulleys, it took almost an hour. Each kilometre away from the national road was an encounter with unrelenting poverty, the more distant from the tarmac, the fewer the services available – electricity and water still beyond the reach of some communities.

Conversation tends to tail off in such circumstances, people drifting into a silent contemplation. Sitting in the back of  the very battered minibus, the focus shifted to such mundane things as trying to find a comfortable position to sit as the bus negotiated its way through the series of potholes.

It seemed an incongruous thing to do, but taking my phone from my pocket, I plugged in the headphones and turned on music.

I bought Adele’s album “25” last Monday, I enjoy her soulful, bluesy voice and the introspection of the lyrics. A friend had commented that they wished she would sing something happy sometimes, but how often do happy songs express a depth of human emotion?

After about five minutes of listening, I turned off the music, unplugged the headphones, and put the phone away. It was too incongruous. In the face of all that was around, the songs seemed trivial and shallow; individual emotions about broken relationships hardly have the intensity of struggling for life itself.

The reaction was not against Adele, but against European life. It was hard to imagine that only an airline flight away there were people who were worried about Christmas wrapping paper, about table decorations, about the right dress and shoes to wear to parties where people will stand and discuss the inconsequential and petty things of the life of rich people – and when compared with the lives of most people in sub-Saharan Africa, Europeans are all infinitely rich.

Reverse culture shock, a negative reaction to the consumerism and excess of Western society, often hits on arrival back in one’s home country, perhaps listening to the latest album on an iPhone whilst surrounded by an Africa that is entirely other from any reality we might imagine, brought an early taste of it. 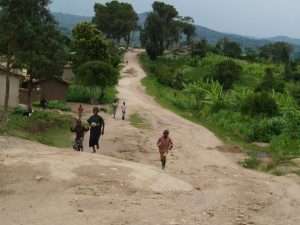