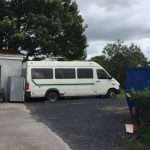 It is four months since the decaying minibus seemed worthy of a photograph. It was hard to know how long it had been parked beside the hospital outbuildings: five years? Perhaps more. Rust streaks are beginning to appear, bricks are used as chocks, its position beyond a skip seems to express its perceived value, and its likely future. Someone must have taken a decision to park it where it is – and someone must have taken a decision to leave it where it is, or declined to take a decision to do something about it.

To declare something is without a future, and that it should be scrapped seems too hard a decision to take. Years of neglect leading to an inevitable end seems the preferred option and it is an approach not confined to ageing minibuses. A month ago, a friend and I spent the day following the railway line from Rosslare Strand to the Barrow Bridge on the route to Waterford. Services on the line were suspended in September 2010, since which time the route seems to have been allowed to continue to deteriorate. The Barrow Bridge is still manned twenty-four hours a day, opened to allow the ship or two that passes each week on its journey up to New Ross, closed to allow the passage of the inspection train that travels the line every couple of months. There was something deeply depressing about the day, the business case for the withdrawal of services in 2010 seems irrefutable, but what was the point in continuing to spend some hundreds of thousands a year (for it must cost that to just man the bridge) while everything is just being left to gradually disintegrate? The cost of the upgrading necessary to allow the line to return to service would far exceed any potential revenue, wouldn’t it be more honest to announce a permanent closure? But who would be happy to take such a decision when doing nothing is a much easier choice?

Even harder than deciding to close a railway is the decision to close a church, a bishop who took such decisions twenty years ago met with opposition so vitriolic that no-one has since contemplated a systematic review of church buildings. There are now decaying buildings, a few miles distant from the nearest town or village, open for services as seldom as once a month, having congregations in low single figures, where the insurance premiums alone are significant costs, where no-one would dare take a decision to say this is the end. No-one would dare declare that this is not good stewardship of resources, that this is not a good way of fulfilling mission, that this is not a good witness to our faith.

Compared with the indecision in the church, hospital and railway authorities are a model of quick decisiveness. 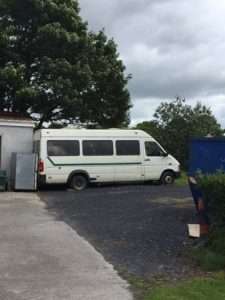