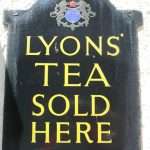 Having one of those smart phones so despised by the members of the chattering classes, who regard those of us who use such devices as “moronic”, whilst driving my car, I can listen to whatever radio station I choose. The default station has become BBC Radio 4 Extra, a station that reruns the best of post-war speech radio, a selection of programmes from the 1950s until the  present day. Attempting to embrace the spirit of broadcasting, programming intended to reach a wide and diverse audience, instead of being confined by the narrowcasting of the niche radio stations, I try to listen to whatever comes on, no matter how eclectic or eccentric it may be.

The station airs some programmes that are a delight, things like Marguerite Patten’s “Century of British Cooking.” To be honest, were it not for the fact that I was driving the car, I would have changed channel, and in doing so would have missed a programme that was as much social history as it was cookery, and which evoked memories of teenage years.

Plain, wholesome food was the norm in our family, fresh meat and vegetables; packeted and frozen foods were not readily available, and why would you pay for something cooked by someone else when you could cook it yourself? There were probably not many meals that had the sophistication of a Marguerite Patten recipe, although there was certainly at least one Marguerite Patten book in the house.

Listening to the radio, it seemed extraordinary that someone who had seemed old in those distant years might have lived long enough to present a series reviewing the progress of cookery over the Twentieth Century. Even if the dishes discussed in this evening’s programme on the 1970s did not feature on our kitchen table, there was a certain satisfaction in Ms Patten telling us how progressive things were in the decade, and how something thought an innovation in the 1990s had actually appeared two decades previously.

The programme was one of those gems of which only the BBC is capable.

The delight was later tinged by regret. A Google search revealed that Marguerite Patten had indeed reached the end of the century in fine, good health, and had lived on until June of last year. Having lived away from England for more than thirty years, so many stories seem to slip me by. Margurite Patten helped shape the history she narrated and, in our house, anyway, her books created the sense of another world.  She would probably have been able to suggest a recipe that had tastes of both delight and regret.