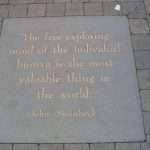 Anonymous shared fifteen images that the author Vandita believes illustrate the harsh truth about modern society. Of course, sharing images demands using the very social media the post purports to oppose; following the link to the Elite Readers site where the images were published by the author Amiel brought a pop-up suggesting that the page might be shared on Facebook.

Being someone who has never contemplated downloading a book, (for me, the tactile nature and aesthetic quality of “hard” copies is essential to the experience of reading), and being a Facebook user who can go days without posting anything, perhaps I am outside the target audience of the satire. Hyperbole has always been a characteristic of satire, but perhaps the exaggeration of the satire masks an uncomfortable reality; the decline of “intellectual” life did not begin with the advent of the new technology, technology only made manifest a “dumbing down” that had already progressed a long way.

How far back need we go to reach a world devoid of the technology that is now pervasive? Twenty years? Perhaps twenty-five years, that would take us back to a world where email addresses were something exotic and where the World Wide Web was but a tiny fraction of its current self and was accessed by dial-up connections that operated at glacial speeds.

Let’s go back to 1991, George Bush Senior was in the White House, John Major had succeeded Margaret Thatcher as British prime minister, the First Gulf War was about to escalate with the Coalition’s invasion of Kuwait to seize it back from Iraq. Twenty-five years ago, neo-liberal economics had come to dominate political life and consumerism had taken possession of popular culture.

As someone who grew up in a Left-wing tradition, it would have been tempting to have claimed that the rot had set in during the 1980s, but that was simply not the case. Since the Nineteenth Century, there had been a tradition of learning in many working class communities: institutes, reading rooms, evening classes, lectures, summer schools; but after the Second World War universal education made redundant much of what had gone before. Access to education was accompanied by rapid growth in incomes and an explosion in the market for consumer goods and leisure activities.

Decades before the advent of the new technology, and the social media it made possible, a choice had been made. Working people might have chosen a more intellectual way, but the community in which I grew up was probably little different in taking the more hedonistic option of evenings in the pub, and cars and televisions and holidays, and all the other stuff the advertisers sold us.

Perhaps we just bought into the options with which we were presented, perhaps we were guilty of what the Marxists in the Labour Party regarded as false consciousness, but we were not forced to make that choice. A First Century Palestinian preacher once observed that one could not serve higher things and material things and would probably have been unsurprised at the choices we made.

Anonymous and the other progressive thinkers should not be too hard on the current generation, they are only following the examples of their parents and grandparents. 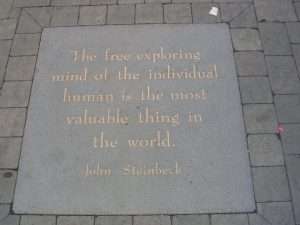