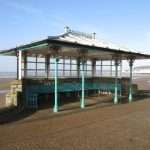 “Why don’t we choose somewhere nice to go for a walk on the way?” The lack of an answer seemed to provide license for a unilateral decision. “I’ll tell you what, we’ll go to Weston-Super-Mare.”

An inward groan. Having said nothing, any objection would be ignored. Weston-Super-Mare? What had we called it in the 1970s? Weston-Super-Mud.

It was hard to remember last being in Weston-Super-Mare? Had it been 1979? Had there been any more recent visit? What might it be like now? We had been to too many English seaside towns which had seen better days, towns with boarded-up premises, graffiti-sprayed esplanades, derelict piers, faded paintwork, rusting railings.

There was a sense of apprehension as we drove from the motorway towards the Somerset seaside town. A certain prejudice had to be confessed, in childhood days there was an unspoken league table of seaside places: anywhere in Cornwall was Division One, Devon was Division Two, Dorset was Division Three, and Somerset was Fourth Division. If a prophet has no honour in his own country, places probably have even less honour among their own local people: familiarity breeds contempt.

As we approached the outskirts of the town the dark clouds that had overshadowed the January morning had dispersed, the sky over the Bristol Channel was a deep blue and bright sunshine shone from the south. The vast promenade stretched out in front of us and we pulled into a parking space. £2.50 for four hours parking seemed a veritable bargain to those accustomed to Dublin where an hour might cost as much,

Eating a picnic lunch, we set out to walk the length of the seafront. It was not the Weston-Super-Mare that had occupied the memory, it was somewhere altogether different. Stripy beach huts made it unmistakeably English, but the architecture of the buildings could have been that of France in the Belle Epoque. The promenade was unspoilt, pristine, immaculately clean; there was nothing that remotely resembled the place that occupied the memory.

Perhaps in high summer the experience would have been less peaceful, there would have been younger and noisier people as well as those who enjoyed the tranquility of the English seaside on a beautiful winter’s afternoon.

Perhaps the proximity of the town to the conurbation of Bristol had brought it into commuter belt, had brought affluent residents, had ensured that the town enjoyed economic vibrancy throughout the year. One thing was clear, there was no fading paintwork, no boarded-up windows, no rusting railings. A plaque announced that the promenade had been renewed in 2011 – five years later, it is looking as well as any architect might have dreamed. 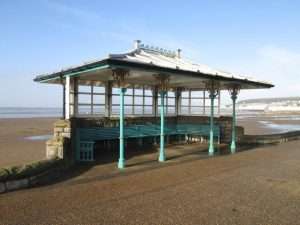