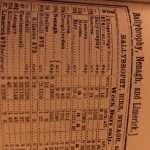 A first visit to Ireland in 1981 included buying a ticket for fifteen days travel on the trains and the buses. The ticket came with a railway timetable; something that was to provide hours of delight in the years to come. Dozens of imaginary journeys were made from stations we had not visited to places with interesting names. It was hard to imagine that thirty years later there would be far more stations on the network than there were in the turbulent year of 1981.

The town of Roscrea in Co Tipperary always seemed an attractive destination. A Catholic nun with whom I had worked for the previous year had moved to live and work in the town. There seemed to be four trains a day each way on the branch line that passed through the town’s station. When asked my career aspirations for years afterwards, I answered, “To be the stationmaster in Roscrea”. It would have been a good achievement; railways always had a poetry about them, they inspired thoughts and imaginings that will never be possible with motorways.

Sitting in Limerick station one afternoon in 2002, the departure boards announced that some trains went via Ballybrophy. It sounded a place from a storybook; it seemed to be the place where the branch line joined the main line: coming from Dublin, one changed at Ballybrophy for Roscrea, Cloughjordan, Nenagh, Birdhill, and Castleconnell, before reraching Limerick. Moving to work in Co Laois in 2010, one of the special delights was to have Ballybrophy station close by. It is a place of former glories; beautiful buildings and trackside structures from the age of steam. Ballybrophy station cannot be passed now without pausing to look over the bridge and trying to imagine all the different people who might have travelled the line. Most importantly, I knew, Ballybrophy was the place to catch the train to Roscrea.

One evening, I drove to Roscrea simply to explore the station. A fine Nineteenth Century building with all the offices one would expect of a proper railway station. It was not hard to stand there and imagine the bustle of the place, a clerk dispensing tickets to passengers bound for Linerick or Dublin, a porter pulling a trolley piled high with trunks, a smart station master overseeing all the life of the station.

Visiting Hay on Wye this morning, one of the numerous bookshops had a reprint of a 1922 edition of Bradshaw’s Railway Guide, a snip at £25. It provided an opportunity to investigate the realities of railway life in Roscrea – the timetable had to be examined three times for a final conclusion: there were just three trains a day in each direction on the mainline and three trains on the branchline to Birr. A dream was finally shattered, there was never a great living to be made in being master of that station. 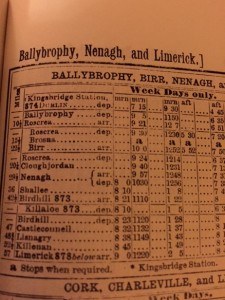