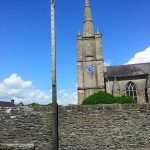 During this season of Lent we are going to look at some of those Jesus met along the way, different characters in the story, and ask what we might learn from those encounters. We begin with the encounter with Satan during the forty days spent in the wilderness in preparation prepare for his ministry and in the wilderness.

It is fashionable to discount talk of the devil as though he belonged to former times, as though he were part of medieval superstitions that we have left behind, so it’s worth looking at the opinion of someone who was not a theologian, not a cleric, but an experienced professional soldier.

When he returned to Canada from Rwanda in 1994, having been commander of the United Nations’ force during the genocide, Lieutenant General Romeo Dallaire was asked by a Canadian Forces padre how, after all he had seen and experienced, he could still believe in God. Dallaire writes, “I answered that I know there is a God because in Rwanda I shook hands with the devil. I have seen him, I have smelled him and I have touched him. I know that the devil exists, and therefore I know that there is a God.”

Dallaire recounts his experiences in his book, “Shake Hands with the Devil: The Failure of Humanity in Rwanda”. At a time when many churches preferred not to talk about the devil, perhaps did not believe in his existence, a seasoned international soldier is prepared to declare his belief in very plain terms. If Romeo Dallaire takes the devil seriously, perhaps we should give him our serious attention.

When we look at Scripture, references to the Devil in the Old Testament are not frequent.

Christians would see the Serpent in Genesis Chapter 3 as representative of the devil and in Leviticus 16 the scapegoat is driven into the wilderness for Azazel, one who would later became depicted as a goat-like demon.

In the Second Book of Samuel Chapter 24 and the First Book of Chronicles Chapter 21 we see the appearance of “Satan”, a word literally meaning the adversary or the accuser. Satan is the one who incites David to hold a census of the fighting men, an action that displays a doubting of God. Satan is the adversary of the Lord in the book of Job, where the Lord allows Satan to test Job.

In Isaiah Chapter 14 Verse 12, we first encounter the idea of the devil as one who has fallen from heaven, in the King James Version the verse reads, “How art thou fallen from heaven, O Lucifer, son of the morning!” It is a theme found in Ezekiel Chapter 28 Verses 15-16, “You were blameless in your ways from the day that you were created, until iniquity was found in you. In the abundance of your trade you were filled with violence, and you sinned; so I cast you as a profane thing from the mountain of God, and the guardian cherub drove you out.”

When we turn to the New Testament the Devil becomes a reality, encountered from the outset of Jesus’ ministry in the accounts of the temptations of Jesus in the Gospels of Saint Matthew and Saint Luke.

There is a keen awareness of the presence of the Devil in the world in the New Testament. Jesus declares the Devil to be one who has fallen from his place with God, in Saint Luke Chapter 10 Verse 18, he says, “I saw Satan fall like lightning from heaven.” “Satan” is used as a title for the Devil on more than thirty occasions in the New Testament, the adversary to be overcome. “Get behind me, Satan!” says Jesus to Peter when Peter tries to dissuade Jesus from going to Jerusalem to face what will happen.

The Devil is referred to by other names and descriptions.

Beelezebul or Beelzebub, depending on which translation is read, captures a sense of the Devil’s fall from grace. Baal-zebul, was a title given to Baal, one of the deities worshipped by the people before the Israelites arrived, and a deity turned to in times when people turned from God, it meant “lord of princes.” “Beelzebul” a name by which Jesus refers to Satan means “lord of the flies” – it is a mark of how far Satan has fallen.

As Jesus approaches the final hours before Calvary, he tells his disciples that the Devil is ruler of this world, but is about to be defeated. “Now is the judgement of this world; now the ruler of this world will be driven out,” says Jesus in Saint John Chapter 12 Verse 31. Then, in Saint John Chapter 14 Verse 30, he says, “I will no longer talk much with you, for the ruler of this world is coming. He has no power over me.” Jesus regards the time as the Devil’s moment, in Saint Luke Chapter 22 Verse 53, he says to those who arrest him, “When I was with you day after day in the temple, you did not lay hands on me. But this is your hour, and the power of darkness!” The power of darkness, the one who had been the morning star, day star has been reduced to darkness.

The conflict between God and the Devil is not one between competing philosophies, it is one between truth and falsehood, between good and evil. The Devil is without integrity, he is “the Tempter” in Saint Matthew Chapter 4 Verse 3, and again in the First Letter to the Thessalonians Chapter 3 Verse 5, where Saint Paul writes, “I was afraid that somehow the tempter had tempted you and that our labour had been in vain.” In Saint John Chapter 8 Verse 44, Jesus declares that the Devil, “was a murderer from the beginning and does not stand in the truth, because there is no truth in him. When he lies, he speaks according to his own nature, for he is a liar and the father of lies.”

If Jesus shows such a degree of concern at the power of the Devil, shouldn’t the church be concerned not to be deceived?

Saint Paul is concerned Christians will be taken in by the deceit, he asks in Second Corinthians Chapter 6 Verse 15, “what partnership is there between righteousness and lawlessness? Or what fellowship is there between light and darkness? What agreement does Christ have with Beliar?” Saint Paul does not underestimate the influence the Devil might have, writing in the Second Letter to the Corinthians Chapter 4 Verse 4, “the god of this world has blinded the minds of the unbelievers,” and in the Letter to the Ephesians Chapter 2 Verse 2, about “the ruler of the power of the air, the spirit that is now at work among those who are disobedient.”

In the First Letter of Saint Peter Chapter 5 Verse 8, we find Saint Peter urging people not to be complacent, “Discipline yourselves,” he says, “keep alert. Like a roaring lion your adversary the devil prowls around, looking for someone to devour. Resist him, steadfast in your faith.”

In the Book of Revelation Chapter 20 Verse 2, Saint John has a vision of an end time where an angel came from heaven and “seized the dragon, that ancient serpent, who is the Devil and Satan, and bound him for a thousand years.” The Devil is released for a while to bring further evil on the Earth until in Verse 10 he is thrown into the lake of fire.

In the pages of Scripture, the Devil is a present reality. To read the story of Jesus and to ignore that he takes the Devil seriously is to read it with a lack of integrity. The Devil is present and the Devil is defeated.

In the Letter to the Ephesians Chapter 6 Verse 12, we are warned plainly, “our struggle is not against enemies of blood and flesh, but against the rulers, against the authorities, against the cosmic powers of this present darkness, against the spiritual forces of evil in the heavenly places.” The battle is an ongoing one, but it is a battle we win.

Saint John, in his advancing years, writes his First Letter and can look back on the experience of the early church, he warns, in Chapter 1 Verses 3-4 about, “the spirit of the antichrist, of which you have heard that it is coming; and now it is already in the world,” but reassures Christians “Little children, you are from God, and have conquered them; for the one who is in you is greater than the one who is in the world.” 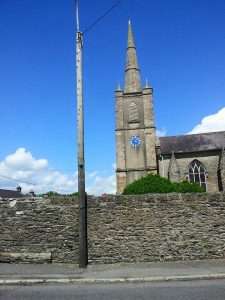