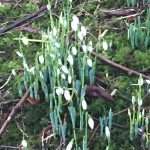 It must have been an evening forty-two or forty-three years ago, for who else but someone with the conceit of a teenage boy would have imagined it possible? On my granddad’s farm on a late summer evening, I had decided that it should be possible to count the stars – it was simply a matter of starting early enough and to count each of them as they emerged after sunset in the clear August sky. The initial count was not hard, the first handful were counted, but then the sky darkened and suddenly there were stars across the whole of the heavens and it was impossible to remember which had been counted and which had not, and the number became simply uncountable.

Driving some thirty thousand miles a year, the springtime is important: the beginning of February brings a return of the light, and the beginning of March an end to frost in the working day. The spring not only makes it much easier to travel the back roads of the Irish midlands, in the six years since moving from suburban Dublin, it has assumed a huge psychological importance. Like the teenage boy who wanted to count the stars, there is a desire to note every detail of the advancing spring.

It starts with the snowdrops in Roskelton churchyard on the first Sunday of January, in a sheltered corner they a declaration that the solstice is past and that the light is returning. The weeks that follow present little challenge to a spring watcher; January is still deep winter. February brings change, daffodils appear, crocuses break through. March is unpredictable, Saint Patrick’s Day can defy any notion that it is springtime, chilling those lightly dressed for the parades. Then April arrives, and it is like the sky darkening on a late August evening; the signs of spring, having been as few as the first evening stars, multiply rapidly.

Driving a country road on a Sunday morning, hedgerows that were last week the stark brown-grey-black of winter have a pale green tinge, blossom has appeared, primroses grow on a bank. “It’s either a feast or a famine,” was the comment in childhood days for the sharp contrasts in life, it might have described the transformation of the Irish countryside.

Sometimes there is a wish that there might be a more even distribution of the abundance, that the dreary darkness of winter might have greenness, blossoms, even flowers. Living fifty-three degrees north of the Equator, it is a vain wish. The abundance has to be enjoyed for the brief weeks it endures. 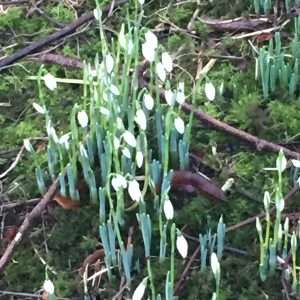